Show me the way to go home: the homing hire bike 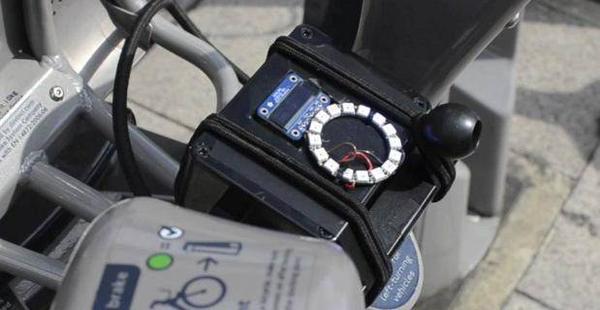 Frequent ‘Boris Bike’ hirers are familiar with the dilemma – you know exactly where you want to go… but the docking station is full. And the next one. If you can find it.

London developer Tom Armitage set out to create a solution: the homing bike. Named Columba, after the Latin name of the pigeon, the prototype clips to the handlebars and ‘homes in’ on the nearest docking station.

It uses Transport for London’s live datafeed to find out which docking stations have spaces, and updates a ring of LEDs accordingly. In Tom Armitage’s words:

“Columba sits on the stem of a hire bike, between the handlebars. A ring of lights acts as a compass – not pointing north, but always towards the nearest docking station with empty racks. As you near a station, the compass-point gets wider, much like the UI in a computer game. If a new station has become closer, the ring pulses green to indicate its ‘lock-on’ has changed.”

Columba exists only in prototype form for now. Its creator says his intention was to “demonstrate the value of civic connected objects” – showing that everyday objects, not just smartphones, can benefit from interpreting smart data on the Internet.

That said, if you do want to check out the concept on your phone, head to bikecompass.tomarmitage.com; or for more on the prototype, read the original blogpost.

Previous story: New A14 will include cycle path
Next story: Cargo bikes come to Manchester