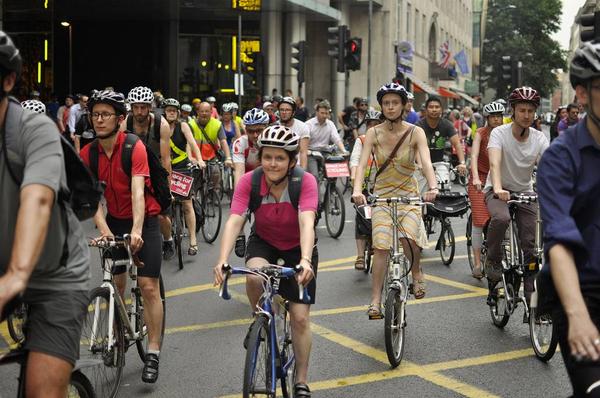 This Saturday, 17th May, thousands of cyclists will be taking to the streets to demand better cycling conditions – while having fun doing so.

The ‘Big Ride’ event, part of the Space for Cycling campaign, follows 2012’s London ride which attracted 10,000 riders. This year, the London Cycling Campaign is hoping to attract even more.

But it’s not just about London: five other cities will be holding Big Rides on the same day. Details are:

London will also have ‘feeder rides’ from locations around the city.

The London Cycling Campaign describes the event as “a fun ride with a serious message, telling politicians we want streets that are safe and inviting for everyone to cycle”. Riders are asked to dress colourfully and bring flags, banners and other paraphernalia. And to emphasise the fun aspect, the rally coincides with the annual Tweed Run, where 500 cyclists dressed in tweed take to the streets on a colourful variety of characterful bikes.

The rides are campaigning for the national Space For Cycling aims:

I really don't know why this event does not seem to be getting actioned anywhere here in Scotland. Maybe someone else can throw some light this way?