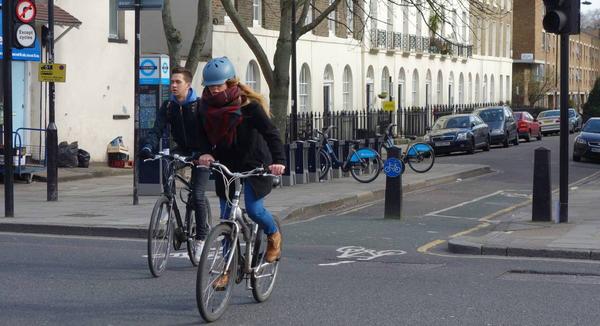 Twice as many people are cycling to work in London than 10 years ago – and Cambridge has kept its crown as Britain’s unofficial cycling capital.

The figures come from analysis of the 2011 Census, released today. 29% of Cambridge residents cycled to work, 17% in Oxford, and 14% in Hackney and the Isles of Scilly. York and Gosport were the only other areas to top 10%.

The figures confirm the ‘London cycling boom’, with the number of bike commuters doubling from 77,000 (in 2001) to 155,000. Brighton and Bristol also doubled, while Manchester, Newcastle and Sheffield experienced increases over 80%.

But nationally, the number of people cycling to work is unchanged – just 2.8%, the same as 2001. In fact, in most areas, the number of cyclists decreased. North Norfolk lost 40% of its cyclists over this period. The Welsh Valleys – Merthyr Tydfil, Rhondda Cynon Taff, Blaenau Gwent and Caerphilly – occupied the bottom of the table, with just 0.3% of people cycling to work in Merthyr.

The Census found that men were much more likely to cycle to work (3.9%) than women (1.6%). Cycling was most popular among 30 to 34 year-olds, and among those working in “elementary and professional occupations”. Managers, admin workers and secretaries were the least likely to cycle.

Cherry Allan from CTC said: “It’s good to see cycle-commuting booming in some of our biggest urban areas, but clearly there are many workers elsewhere who could do with more encouragement to see that cycling to work is one of the best, most cost-effective ways of introducing exercise into their daily routines. Promoting the activity to women seems especially important.”

For Sustrans, Rachel Bromley criticised “haphazard” provision. “The public demand is there and many urban councils have made good progress in training and infrastructure as is shown by the outstanding urban cycling results. It shows when decision makers put their minds into increasing cycling, real progress can be made.”

Previous story: Cycleway makes its way to the coast
Next story: Touring gets harder as more youth hostels close