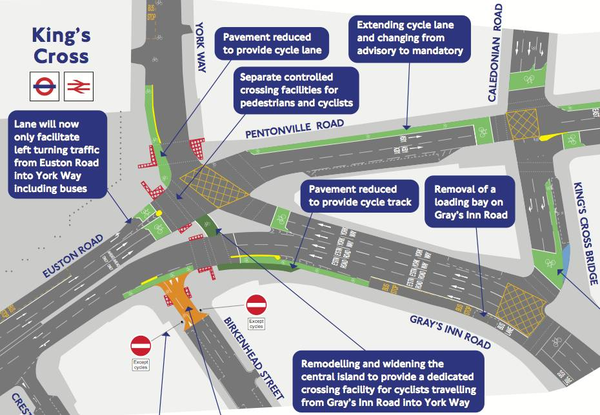 Tuesday is the deadline for cyclists to ask for a better deal at King’s Cross – where Transport for London’s plans have been widely condemned as “not good enough”.

King’s Cross is well known as one of the capital’s worst cycling blackspots; it was here that Min Joo Lee was killed by a construction lorry in October 2011. TfL’s proposals are focused on small improvements to the existing on-road cycle lanes, including a solid (mandatory) white line on the outside, and space taken from the pavement.

However, London Cycling Campaign and prominent London cyclists have criticised the plans for their lack of ambition. LCC said:

“It will not be possible to go through the junction in any direction without being exposed to unacceptable levels of danger. Some sections do not even meet the old cycle design standards set out a decade ago.

“Even the lorry driver, Terry Gibbs, exclaimed that the Mayor should take out one of the traffic lanes and put in a proper bike lane. We agree with him; so did the coroner.”

Instead, LCC believes that TfL should build “connected and continuous protected cycle lanes, for safe passage through the junction in every direction”.

Writing at ibikelondon, blogger Mark Ames said that cyclists were getting a raw deal.

“The entire surface of all the carriageways in the redevelopment area will be resurfaced – all on the back of the cycling budget. You might find yourself on a terrible pavement cycle lane, whilst motorists glide smoothly past on beautiful new tarmac paid for with money set aside to supposedly make you safer. You couldn’t make it up.

“We've all been enticed by the images of protected cycle lanes and the mock ups of cycle tracks yet to be built, but when it comes to proposing actual work, this is what we are met with.”

TfL’s plans can be found here. The consultation, which closes on Tuesday 25th, can be completed online.