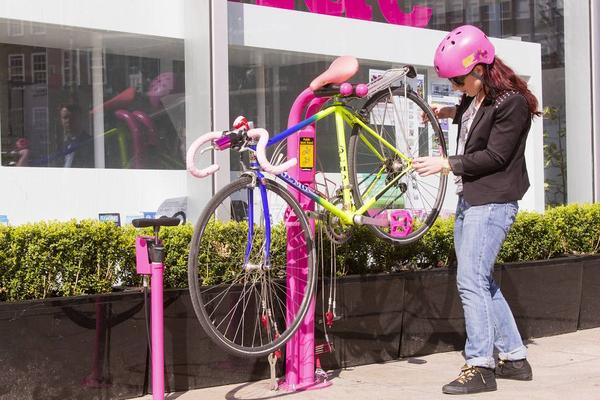 London has no shortage of weird road layouts, but perhaps rather fewer wonderful ones. Now Transport for London is seeking to combine the two with a programme to fund “creative and original on-street projects”.

The Future Streets Incubator Fund has a comparatively modest £1.8m, to be spent over three years to make more streets “where people can socialise and interact”. According to London Mayor, Boris Johnson:

“Anything and everything will be considered, however weird and wonderful. We want to harness the creativity of Londoners and put their ingenuity on the map.”

Similar projects funded recently by TfL include a scheme to co-ordinate deliveries around Baker Street, so lorries are on the street for fewer hours of the day; a cycle freight and pitstop (pictured) service in Bankside; and a commercial vehicle reduction scheme in the West End. But the scheme is now setting its sights higher, pointing to a Brooklyn car park replaced with a tree-lined public plaza, ‘street tennis’ in Toronto, and Bogota’s famous car-free Ciclovia Sundays.

Local boroughs, Business Improvement Districts, and community projects are invited to apply to the fund by emailing incubator@tfl.gov.uk.

Meanwhile, 17-year old blogger MaidstoneOnBike has recently garnered attention for his well-thought through redesigns of TfL’s proposed junction schemes at Kings Cross and Elephant & Castle. We can’t think of any better way for TfL to support “the creativity of Londoners” (or, ok, nearby residents) than by adopting these sensible, community-endorsed schemes.