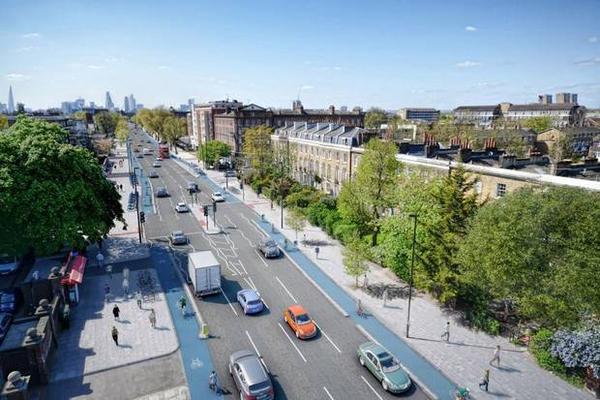 The news that London has been waiting for came today – the East-West and North-South Superhighways, nicknamed ‘Crossrail for Bikes’ have been approved.

Designed with Dutch-style segregation from traffic, the Superhighways are set to be the busiest and most significant cycle routes yet built in the UK.

In addition, two further new routes will be built and four upgraded:

The Superhighways were approved at a Transport for London board meeting despite fierce opposition from Canary Wharf’s Peter Anderson, National Express’s John Armitt, and representatives of London taxi-drivers. Armitt described cyclists as “a minority… a danger to themselves”.

The Mayor of London, Boris Johnson, audibly showed his exasperation with Anderson at the TfL meeting. In a statement, he said:

“We know that Londoners want these routes and that they want them to be delivered to the high standard I promised, as quickly as possible. I will keep that promise and spades will begin hitting the ground next month. Thanks to the skill of TfL's engineers and traffic managers, we have made changes which keep the cycle track and junctions segregated, while taking out much less of the route's motor traffic capacity.

“I now look forward to the transformation that these planned routes will bring – not just for people who cycle now, but for the thousands of new cyclists they will attract.”

Olympic cyclist Chris Boardman said the news was highly significant for people outside London: “most importantly of all, it will set a standard for the rest of the country”. Cycling charity Sustrans called it “an important starting point – a real signal of intent”, while CTC called it a “game-changer”.

Previous story: We're back! (Where've we been?)
Next story: Oxford revamp angers cyclists