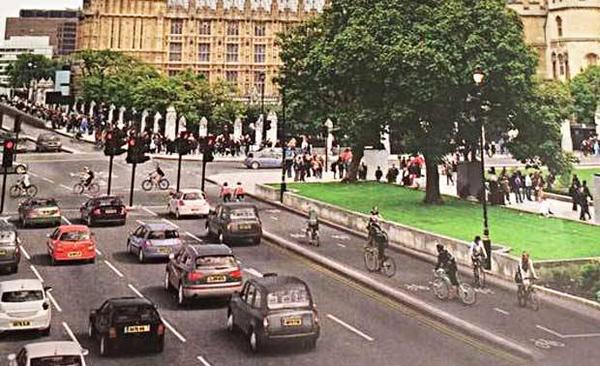 London’s cyclists will, at last, get a safe way to cross town from east to west if new plans from Transport for London get the go-ahead.

Plans are being announced tomorrow (Wednesday 3rd) for east-west and north-south Cycle Superhighways, with Dutch-style separation from car traffic. But plans for the east-west route have leaked a day early – and they promise a step-change in Central London cycling.

The new route will run from Tower Bridge, along the Embankment, to the Houses of Parliament – where it will turn ‘inland’ to head through Hyde Park to Paddington and the Westway. The route will connect with the existing CS3 at Tower Bridge, and a mooted new cycleway over the Westway. (Base map: OpenStreetMap data, cartography by Mapquest.)

What sort of route?

The route will be a “wide kerb-segregated cycle track”, offering protection from motor vehicles. Existing traffic lanes will be removed to make space for the new cycle track.

In most cases the track will be two-way, but on Westbourne Terrace, near Paddington, there will be two one-way cycle tracks “replacing a traffic lane in both directions”.

To achieve this, several junctions will be torn up and turns for motorists restricted. Horse Guards Road, between Green Park and Whitehall, and Shorter Street, at Tower Bridge, will be closed to through traffic. A raft of banned turns will be introduced to prevent motorists cutting across the cycle lane. At Blackfriars Bridge, an entire slip road will be closed to traffic, to become the link between the east-west and north-south Superhighways.

Perhaps the most high-profile changes will be at Parliament Square, where a new cycle track will replace existing car and bus lanes. Traffic signals will guide cyclists past traffic here, with the route swapping to the south side of the road then back to the north. Then on the northbound side of Constitution Hill, opposite Buckingham Palace, the existing horse ride will become a two-way cycle track.

However, the route plans are not yet finalised – particularly through the Royal Parks. TfL has not yet been able to come up with a finalised design for St James’s Park, saying merely “Proposals are subject to discussion with the Royal Parks”. A circuitous route has at least been identified at Hyde Park, passing through the centre of the park using South Carriage Drive and West Carriage Drive, but even then TfL admits “Detailed design is still in progress… further consultation at a later date”.

And in an unusual change for London’s Cycle Superhighways, the mockup images are bereft of light blue paint on the cycle lanes – reflecting the end of Barclays’ sponsorship?

The plans will be officially launched tomorrow, together with designs for a north-south Cycle Superhighway from Kings Cross to Elephant & Castle, via Blackfriars Bridge. TfL is also planning a number of feeder ‘Quietways’ along back streets, to give convenient links from the two Superhighways into the City and West End.

Once the plans are live, you will be able to have your say at TfL’s consultation website, tfl.gov.uk/cycle-east-west.

The plans were posted to Twitter by user @hodadr – many thanks! – who also noted wryly: “of course, when the black cab drivers hear of this there will be uproar”. 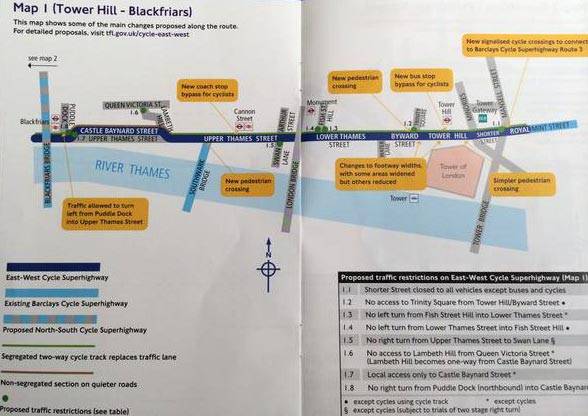 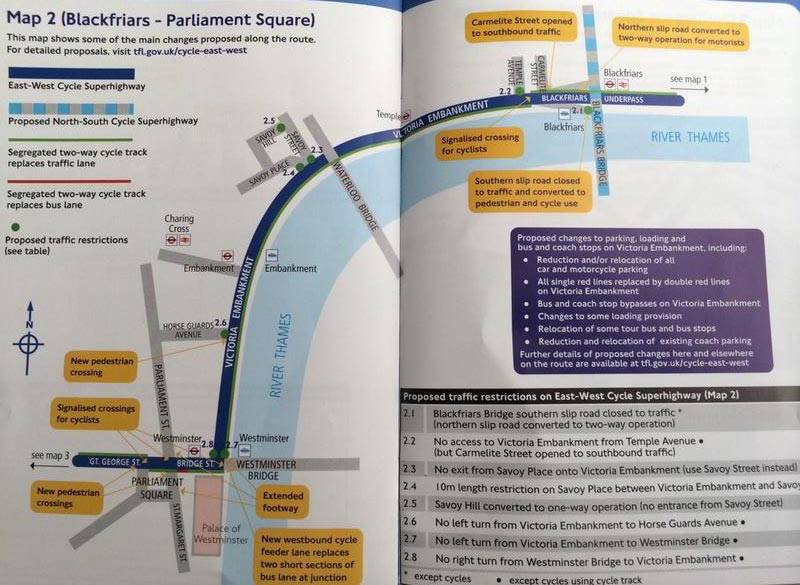 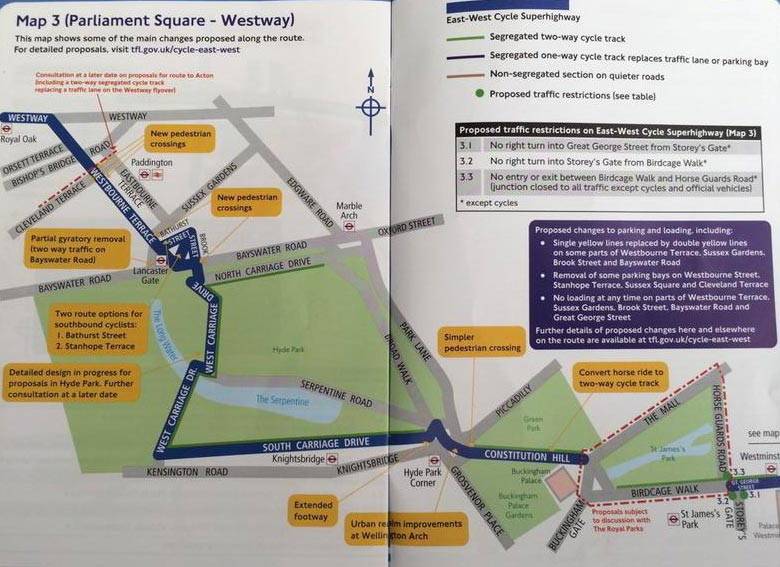 Previous story: Cyclists to be ‘caged’ in new Bolton route
Next story: North-south route is half Super, half Highway