North-south route is half Super, half Highway 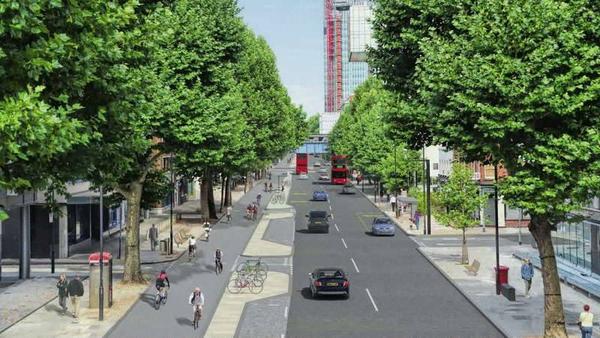 But unlike the East-West route, which will be fully segregated all the way from the Westway to Tower Bridge, part of the North-South route will be built as a ‘quietway’ – a back-street route without major new infrastructure.

The route will be segregated south from Farringdon, with a two-way cycle track being built along Farringdon Road, Blackfriars Bridge and Blackfriars Road. North of Farringdon station, the route is envisaged as “a ‘Quietway’ back-street cycle route to King’s Cross”. TfL says the northern section is “subject to further consultation […and…] to further discussion with the Borough of Camden”.

If the consultation shows support for the proposals, the two routes are set to open in March 2016.

The route in detail

As with the east-west route, the main principle is taking away motor traffic lanes to build a two-way cycle track, four metres wide, and separated from the main road by a physical barrier. Turns will be prohibited, minor roads closed, and bus stops relocated to minimise the chances of cyclists coming into contact with drivers.

‘Bus stop bypasses’ will take cyclists past pedestrians waiting for a bus, to a similar design to that used between Bow and Stratford. Traffic lights will be reworked at junctions, with one typical design being “Cyclists run with ahead traffic to maximise green time; turning traffic held back”. Again, unlike the existing Superhighways, the route will not be painted blue. 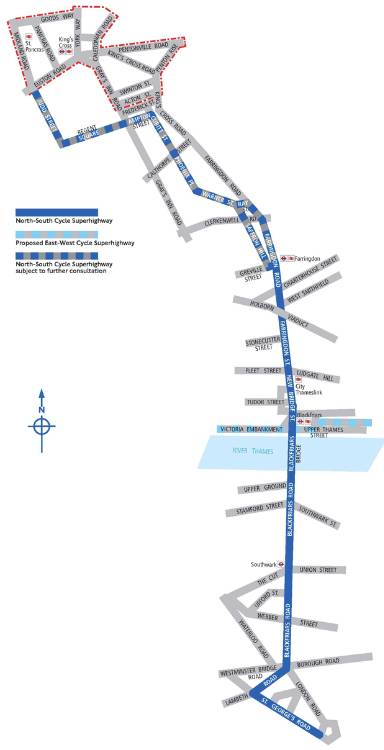 For the ‘Quietway’ section north of Farringdon, no firm plans have yet been published and TfL says it will launch a separate consultation.

The segregated route proper starts at Farringdon, where TfL is considering either a two-way cycle track, or two one-way tracks (one on each side of the road) “to ensure that the connection between the two sections does not create any barriers or conflict”.

If the latter is chosen (‘Option B’), this might involve lighter ‘semi-segregation’ (such as plastic wands or bollards) rather than a strong barrier; vehicles would be able to cross the track on the eastern side for loading, disabled access, and motorbike parking. ‘Option A’ is a full two-way lane on the west side.

From New Bridge Street and across Blackfriars Bridge, the plan is for a two-way, four-metre track on the western side. Blackfriars Junction, on the north bank, would be the link with the East-West Superhighway, with one slip road being given over entirely to pedestrian and cyclist use.  The footway would be narrowed on Blackfriars Bridge “to its historic width of five metres”, with two traffic lanes retained in either direction (one bus, one car).

The two-way track continues onto Blackfriars Road, though with various accesses across it into the One Blackfriars development. One street (Ufford Street) would be closed, and several turns banned, to reduce the number of conflicts. The wide island between cycle track and road would be available “for deliveries and for setting-down bus, coach and taxi passengers”. 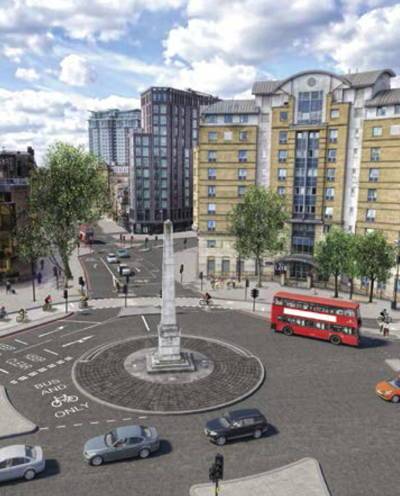 There would be no segregated track provided on Lambeth Road, which TfL describes as a “non-segregated section on a quiet borough road”, but it would resume for St George’s Road and the final run to Elephant & Castle.

TfL is honest that “our analysis shows the proposals would mean longer journey times for motorists and bus, coach and taxi passengers along most of the route, both during construction and once complete”. However, they believe that the benefits for cyclists would be worth it, and that the new route would make Blackfriars Road a more pleasant place for pedestrians too.

TfL is inviting comments at consultations.tfl.gov.uk/cycling/northsouth, where the full documents can be viewed. The consultation is open until Sunday 12 October, and there will be public exhibitions in Blackfriars during September.

“Overall, LCC is really pleased to see commitments to substantially reallocate carriageway space to ensure protected space for cycling – particularly on the east-west superhighway, where cyclists regularly make up almost half of traffic during the morning peak. LCC’s main concerns are that some of the planned new junctions are not safe enough and that the width of the new cycle tracks is too narrow in places. We’d encourage all our members and supporters who use the routes to feed back on the proposals on the TfL website.”