“Cyclists stay back” stickers get the boot 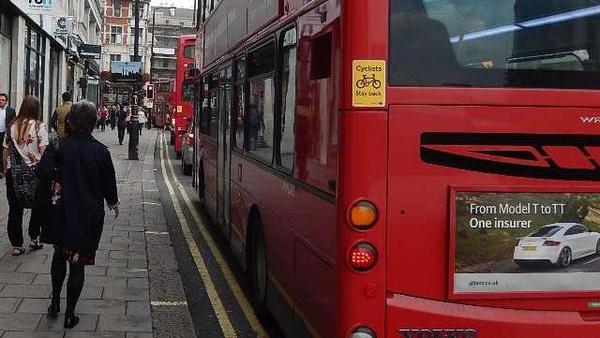 London’s reviled ‘Cyclists stay back’ stickers, which many campaigners accuse of “victim-blaming”, are to be removed from the capital’s buses.

After a meeting with London cycling activists, Transport for London has conceded that the sticker wording is inappropriate, and that the stickers are being wrongly applied to small vans and even cars. It has now promised to remove the stickers from all London buses until a new form of words can be agreed.

TfL will also ask freight operators to remove stickers from small vehicles entirely, and to remove them from large vehicles until the new wording is settled. Once the new stickers have been designed, they will be accompanied by guidance about when to use them – and when not.

In a powerful piece for the Guardian, Peter Walker explained the problems with the stickers:

“The ‘cyclists stay back’ message is, at best, over-simplistic and misleading, at worst outright dangerous victim-blaming. The choice of words implicitly places the responsibility for safety on the cyclist, not the driver.”

National cycling charity CTC described the discussions with TfL as “positive”, and added “expect to see much better stickers by the end of summer”.