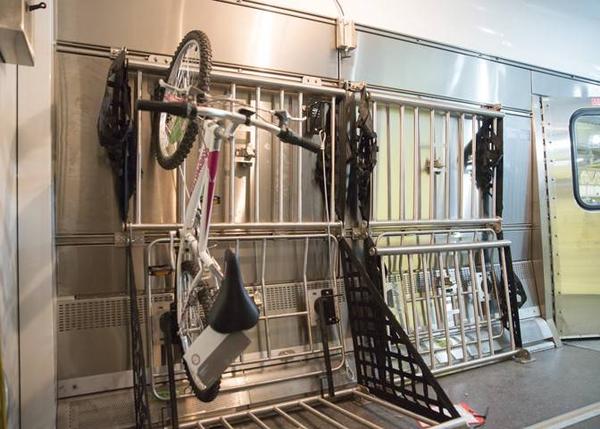 Cycle tourists heading to the US have long bemoaned the lack of bike accommodation on Amtrak trains. Now the national train company is starting to put that right.

New ‘baggage cars’ are being introduced on many of Amtrak’s long-distance routes. Field testing has begun in which the carriages will be tried on the lines to Chicago, New Orleans, Miami and along the Northeast Corridor, to check their speed, stability, braking and baggage handling.

The aim is to introduce the new carriages by the end of the year, with new diner and sleeper cars to follow by 2016.

Each baggage car will have built-in ‘hanging racks’ for bikes. At present, most Amtrak lines will only take bikes which have been partly disassembled and packed in a box. The new fold-down racks are capable of taking either luggage or bikes, raising the possibility that up to 50 bikes could be transported at once in these spacious carriages. Unusually, the bike space will be air-conditioned!

Similar guards’ vans have not been included in new-built British trains since the 1970s. However, the forthcoming Super Express Train for UK lines promises to have ten bike spaces per nine-car train – a modest improvement over the current six.