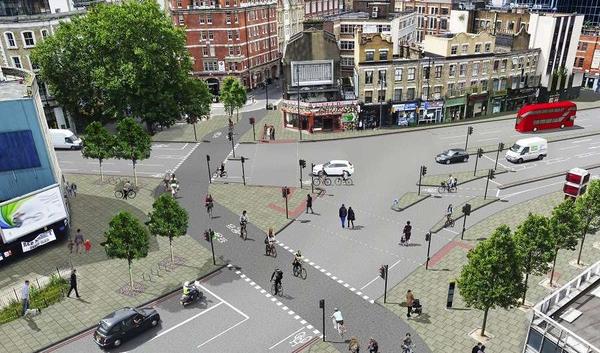 East London is to get a new Cycle Superhighway – but a very different creature to the dramatic plans for the cross-London routes.

Whereas the recently approved North-South and East-West routes will be mostly segregated from motor traffic, CS1 from Tottenham to the City will mostly follow existing back streets. New cycle lanes and tracks will only be built where the route passes along busy roads, though there will be traffic-calming measures along the smaller roads.

CS1 will start at White Hart Lane and finish at Liverpool Street, some seven miles in all. It will run roughly parallel to the busy A10. Perhaps the most welcome section is a new, safe crossing of Old Street (pictured) with a light-protected route clearly marked for cyclists.

In an unusual admission, TfL appears to have conceded that the plans through Haringey are not good enough, perhaps watered down after opposition from the borough:

“We welcome suggestions for alternative route alignments through Haringey. We continue to investigate alignment options including the extension of the two-way cycle track further south along Tottenham High Road.”

However, TfL says the back-street route will still be quicker for cyclists than following the A10 would be:

The proposals have received a mixed reaction. Danny Williams of the Cyclists in the City blog described it as “rather patchy… there are some good proposed improvements in through Hackney, but get closer to Tottenham and it falls apart”.

You can view the plans on the TfL website. Comments are open until 29th March.