The Government is encouraging hauliers to make more out-of-hours deliveries – potentially making the streets safer for cyclists at busy times.

The ‘Quiet Deliveries’ initiative particularly targets construction lorries, responsible for numerous fatal cycling accidents in London. But with no legal compulsion to the ‘guidance’, it remains to be seen whether HGV owners will change their habits.

The scheme draws on the experience of the 2012 London Olympics. According to Transport Minister Stephen Hammond:

“The 2012 Games proved that with the right planning, we could reduce the number of delivery vehicles on the road at key times when roads are likely to be more congested, such as rush hour. This helps to free up peak time road space for other road users.”

Lorry operators are encouraged to reschedule deliveries outside the normal working day, into the ‘shoulders’ of the day (before the morning rush and after the evening peak) and potentially further into the night. For their customers, reduced congestion means delivery times will be more certain: for cyclists, it takes lorries off the roads during peak commuter times. 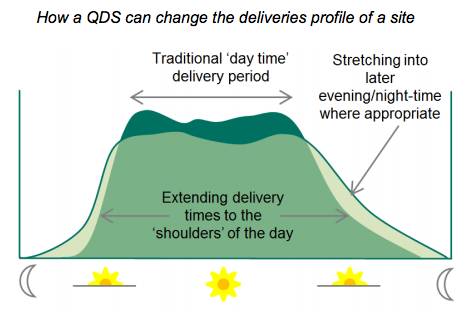 But as the guidance anticipates, such changes won’t always be popular with local residents, who may have their quiet evenings disturbed by increased traffic. The Government recommends that HGV operators upgrade their fleets to have quieter engines, and re-educate their drivers to manoeuvre more efficiently and use the horn less – which may be easier to say than to achieve.

One promising aspect of the scheme, however, is that it puts the onus on local councils (through the planning system) to encourage or require this approach. The London Cycling Campaign has already demonstrated a talent for lobbying London boroughs to improve HGV standards, and has now persuaded every single one to offer its drivers “Safer Urban Driving” courses – suggesting that this approach could be adopted by the more enlightened councils.

Cycle campaigners can find full details of the scheme on gov.uk.

Meanwhile, LCC is lobbying the Department for Transport and EU to make Safer Urban Driving courses compulsory for all lorry drivers.

Previous story: “Street View for bikes”: new on our journey-planner
Next story: Riverside path to be upgraded