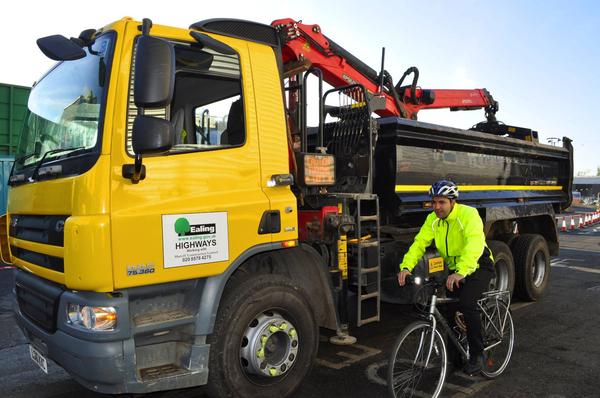 A London council is heralding a “20% improvement in driver behaviour” after fitting a cycle warning system to one of its construction lorries.

Ealing Council says 15 potential serious collisions were avoided in six months thanks to the Cycle Safety Shield detection system. The camera-based detector filters out inanimate objects such as bus stops and fences, so that it can alert the driver to pedestrians, cyclists and motorbikes. The aim is to eliminate all blind spots around the vehicle.

During the trial period, which ran from January to June, the system detected more than 40,000 cyclists, pedestrians and motorbikes. The alarm alerted the driver on 15 occasions, when they became close enough to collide with the lorry. According to Cllr Bassam Mahfouz:

“We are committed to reducing lorry danger because we know they are involved in approximately two thirds of cyclist deaths in London. This technology can save families from hearing the tragic news of a loved one’s death. In each of the alerts during this trial the driver was travelling an average of 13.6mph, which means that 15 potentially serious or even fatal collisions were avoided because the driver was warned.

“Some of the other technology overloads drivers with constant alerts when objects get too close. When this system goes off the driver knows that a cyclist, pedestrian or motorcyclist is in danger, giving them time to brake. There is also a visual and audio warning to cyclists when a vehicle is turning left.

“We are keen to look at a further roll-out of this system across our fleet”.

Ealing Council developed this technology in partnership with Safety Shields Systems and the trial was funded through Transport for London’s borough cycling programme. Ealing Council has fitted the system to a ten-plate grab lorry, which is operated by its highway contractor, Murrill Construction. Cycle Safety Shield is now being further independently tested by Transport for London on buses and lorries.