19 more London junctions to be tackled 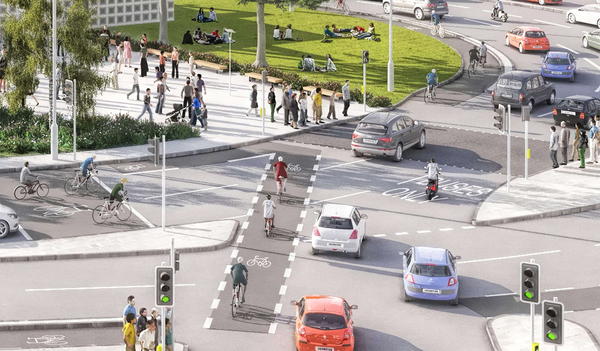 Transport for London has announced £200m worth of improvements at 17 junctions and other dangerous roads across the capital – plus major schemes for Elephant & Castle and the IMAX roundabout at Waterloo.

The announcement brings the total number of new schemes to 52, with 33 cycling improvements announced last week.

The northern roundabout at Elephant & Castle will be remodelled to accommodate separated cycle lanes, plus wide painted areas when crossing lanes at the roundabout. Public consultation will start later in March. At the IMAX roundabout, meanwhile, improved cycle routes will be joined by better interchange facilities at Waterloo station.

“The Elephant & Castle is a terrible place for cycling and walking, and totally out of tune with what a modern town centre in a world-class city should be like. It's fantastic news that it is going to be redeveloped, and a golden opportunity for the Mayor to show he really means it when he says he wants the capital to be second to none for getting about by bike.”

As well as the two major schemes at Elephant & Castle and Waterloo, nine of the 17 smaller schemes have a significant cycling component:

The other eight are more general safety and congestion schemes. They are: Croydon Fiveways: Major work to reduce traffic congestion in the local area and support growth in Croydon's metropolitan centre. Brent Cross/Cricklewood: Creation of new road layouts and public spaces in the area to support new development and improve access to retail, dining and leisure facilities. Mill Hill Circus: Work to reduce congestion and improve journey time reliability in the area. Purley Cross Gyratory: Improvements to the the quality of public realm and better access through the area for bus passengers and other road users. Woodberry Down: Scheme to deliver safe, reliable and accessible road improvements to support new housing development in the local area. Thornton Heath Ponds: Focused on improving the quality of public realm around Thornton Heath Pond. Trinity Road/ Burntwood Lane: Work to reduce congestion and delays at the junction of Trinity Road and Burntwood Lane. Tulse Hill Gyratory: Shorter-term scheme to improve road safety ahead of a longer-term scheme to address concerns about the operation of the gyratory.

The Chair of London Councils' Transport and Environment Committee, Councillor Catherine West, said: “These schemes will better address the needs of all road users, including pedestrians, cyclists and motorists, and have a positive impact on the quality of life for residents.”