Looking for a challenge? Try coffeeneuring 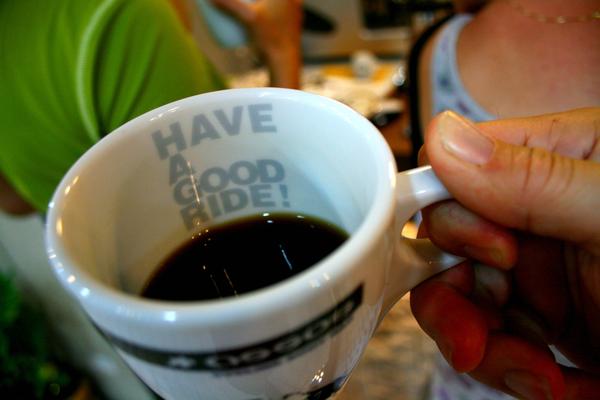 There’s no shortage of cycling challenges on the web, usually tied up with fitness – cycle every day for a year, beat your ‘personal best’, ride 50k, 100k, 200k. But here at cycle.travel, we think we’ve finally found one that appeals to us: coffeeneuring.

The rather uncomfortable portmanteau word is a nod to ‘randonneur’, the long-distance amateur cycle sport. The idea is simple: in seven consecutive weekends, you must ride your bike to seven different coffee shops, and have a coffee.

The idea was hatched in the famously coffee-centric city of Seattle by local cyclist Joe Platzner, of Seattle Randonneurs, and then taken up by Mary Gersemalina from Washington DC. Mary added 19 rules to the challenge, saying:

“I invented Coffeeneuring and built a rather long set of rules around it, in part because randonneuring is a sport with many rules and because there is such irony in creating rules around a simple activity like riding your bicycle to a cup of coffee. On closer examination the rules basically boil down to ‘ride your bike at least two miles to a cup of coffee and take a picture.’ ”

But if you do want to follow the rules as written, they’re not too onerous: weekends only, minimum two miles, maximum one coffee shop per day, and take a photo. Hot chocolate, tea, and “apple cider” all count, though sadly the latter is simply US English for plain apple juice. Check out the full rules at chasingmailboxes.com.

The US 2013 Coffeeneuring Challenge ran in October and November, with 125 cyclists taking part – many of them recording their rides on Twitter with the hashtag #coffeeneuring. Only one of the participants was from Britain, but since cycling to a tea room is such a long-established British tradition, we can see this taking off over here.

Should you need inspiration for your rides, you can of course use our journey-planner and city guides to plan a route. We would also heartily recommend patisseriecyclisme.com, an entertaining directory of cycle-friendly cafés around Britain.