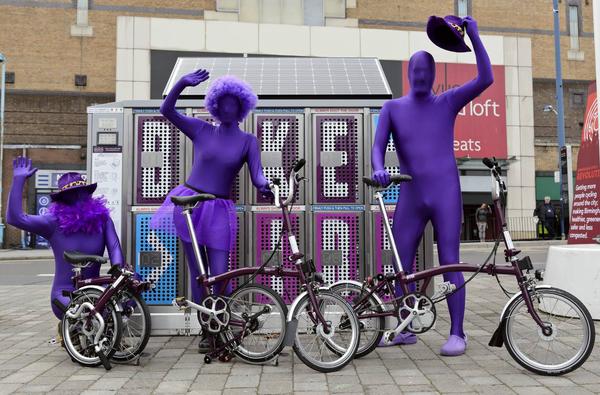 Birmingham might not have a city bike-hire scheme yet, but you can now hire a Brompton from Moor Street railway station.

The foldable bikes will be rentable from each of the three city centre mainline stations: Moor Street at first, then New Street and Snow Hill. The automated ‘Brompton Docks’ have already been installed at other city stations across the country.

The docks each house 20 of the miniature folding bikes. The £140,000 scheme has been funded by £90,000 secured by London Midland through the Department for Transport’s Cycle-Rail Fund with Birmingham City Council contributing the rest of the money.

“Cycling can play an important role in clearing the congestion on our roads and it is important that we keep looking for ways to make sure that it best connects with rail travel.”

Would be Bromptonauts need to register online first at bromptondock.co.uk. After selecting the date, location and time they wish to hire a bike, they’re sent a PIN code direct to their mobile phone which allows them to access one of the British-built cycles. Rentals cost £2.50 per day for people registered as frequent users and £5.00 for those signing up as occasional users. Bikes can be kept for as long as needed, with a daily charge applied to the account holder’s credit or debit card, and can even be returned to Brompton Docks at other railway stations.

Fittingly, the docks are manufactured locally in Dudley and have their electronics and power systems fitted at a Birmingham based plant.

Other cycling improvements at local stations include ‘Cycle Hubs’, which feature swipe-card parking for members and internal and external CCTV. These have already been opened at Selly Oak and Stourbridge Junction stations and are planned for locations including Rowley Regis and Longbridge.

I'm all for greater cycling access, though if I was going by train to Birmingham, I'd just take my Brompton on the train.