Your routes around Birmingham

Beauty and the beast? Birmingham’s canals are easily the equal in length of that more famous cycling city, Amsterdam… the towpaths even have cobbles to match. Yet the city also has some decidedly cycle-hostile roads, clogged with cars and busy all day long. Getting around safely requires an eye for the cut-through.

The Worcester & Birmingham Canal is perhaps the city’s best canal route. Flat and direct, it links Bournville, Selly Oak and Edgbaston to the city centre. The surface may not be tarmac but is generally good quality. There’s no cycling past Gas Street Basin, in the city centre, but you can dive off onto back streets here.

Birmingham’s best-known and busiest traffic-free route, this length of NCN 5 runs from Lifford to the centre. It’s traffic-free for the first 60%, passing through Cannon Hill Park, then drops onto quiet roads. (NCN 5’s entrance to the city centre, via Hurst Street, is admittedly horrible.) A very worthy alternative to the Pershore Road, it’s popular both with rush-hour commuters and weekend leisure riders. The tarmac surface is preferable to the canal alternative.

This is a signed, on-road alternative to the Birmingham & Fazeley Canal, starting near Castle Vale with its own extensive network of cycleways. 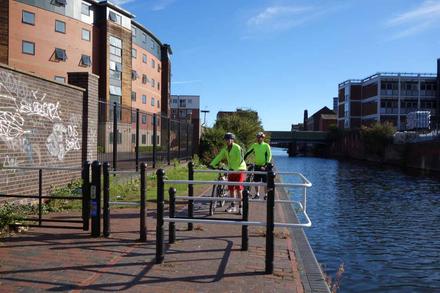 The Bike North Birmingham project has created two good-quality routes from Sutton Coldfield, starting in parkland before delivering you to the canals for the bulk of the journey. NCN 534 goes via the New Hill Valley; NCN 535 is a westerly route past Witton Lakes. The Birmingham & Fazeley Canal then continues to the city centre via Spaghetti Junction.

The canal climbs through 25 locks to Birmingham, so it’s not flat. The surface is mixed, sometimes good-quality brick or tarmac, but with rough cobbles past locks. Though clearly slower than the A5127, this is a much more enjoyable route.

This traffic-free route from the eastern edge of the city is less well known, but well-surfaced and traffic-free. At present it peters out at Small Heath; you can make your way to the Grand Union Canal here and continue to the city via Digbeth.

Solihull to Birmingham by canal

The Grand Union Canal connects Birmingham with the outskirts of Solihull – and if you keep going, Warwick and London. However, until you reach the locks at Camp Hill, the surface is uneven, and its situation in a wooded cutting means it can be muddy.