Birmingham has a thriving bike scene with Critical Mass, jumble sales and family rides. The city’s cyclists even have an answer to London’s iconic Underground map: the Top Tube Map, showing safe routes around Brum. The City Council has belatedly woken up to cycling’s potential, and is drawing up plans for new routes.

Birmingham’s traffic-free routes are largely based on the canal system. This will get you comfortably to Edgbaston and Selly Oak, Wednesbury and Wolverhampton, or Gravelly Hill and Erdington. The city also has a small number of cyclepaths through country parks. The best is the Rea Valley route, part of National Cycle Network route 5, which wends attractively out from the city centre to Kings Norton and Longbridge.

A new set of Sustrans routes has recently opened in the north of the city, around Erdington and Sutton Coldfield. These connect with the canal paths to provide a safe, enjoyable alternative to the notorious A5127.

Even though the ‘concrete collar’ now longer encircles the city centre completely, the central roads remain hostile territory for cyclists. This is true of both the ring roads (Queensway and Middleway) and the arterial roads that take traffic into the city. These arteries also have frequent bus services, another hazard for the unwary. Some have been gifted with cycle lanes or paths, including shared-use underpasses beneath roundabouts. As is so often the case, though, they’re rarely designed to the highest standards.

With care you can find a back-street route that avoids the snarlups, though Birmingham’s estates tend to funnel traffic onto a small number of through-routes. Two routes are signposted from the city centre, one to Bordesley and Shirley, another to Ward End and Castle Vale.

20mph limits are uncommon, but the council is planning to impose more across the city. Contraflows for cyclists are also becoming more frequent.

More happily, cycles are permitted on most of the city-centre pedestrianised streets, such as New Street and High Street. The Bullring shopping development is out-of-bounds, but you can cycle underneath now that the ring road has been broken.

Birmingham is a hillier city than outsiders might think, and a bike with forgiving gears will stand you in good stead – though there are several hardened fixie riders in the city.

Birmingham’s status as an emerging cycle city means there’s a real fellowship among bike riders. Bike shops are friendly and helpful, with long-established outlets now being joined by modern-style shops which will sell you a latte with your lubricant. A busy events calendar includes repair sessions, family rides, Critical Mass and jumble sales.

Cycle parking is improving, with some 600 locations across the city. Bike theft is far from endemic but you should still take care locking up your steed, particularly in the centre; New Street station is notorious for it. You can take bikes on any local London Midland train without booking; the longer-distance Virgin, CrossCountry and Arriva trains are less easy. 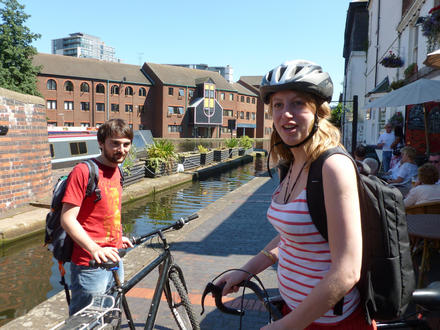 Birmingham’s canal network is a boon for the cyclist – but don’t expect miles of pristine tarmac.

Surfaces vary greatly, and can be muddy in winter. Like all canals, the towpaths are narrow and shared with other users. Don’t barrel along at full speed, and be particularly careful at bridges. The canals can be hillier than you think: from Birmingham to Wolverhampton is almost flat, but to Aston is one long hill. Though incidents are rare, you may also want to consider your personal security on the more isolated stretches of the network late at night.

South from the city centre, the Worcester & Birmingham Canal to Edgbaston, Selly Oak and King’s Norton is well-surfaced and scenic. The Main Line canal to Wolverhampton is rougher, but amazingly direct and often empty. The Birmingham & Fazeley Canal, towards Aston and Castle Bromwich, is moderately surfaced, though the locks and humpback bridges make it hilly for a towpath. The Grand Union out to Solihull is pleasant in summer but can be boggy in winter.

The web of canals extends into the Black Country, where the only uncyclable towpath we’ve found is the Tame Valley Canal (Wednesbury to Spaghetti Junction) – and even that should be fine on a mountain bike.

You no longer need a permit for cycling on canals. But don’t forget the puncture repair kit!

There’s no Boris-style municipal bike hire scheme, but private company On Your Bike rents out all kinds of cycles. You can also hire bikes from Cycle Chain, a bike shop on a boat at Cambrian Wharf (turn north at the NIA; the wharf is soon after, just above the first lock). 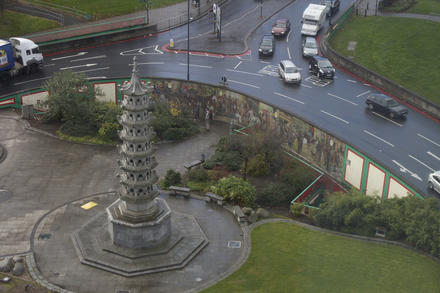 Birmingham is laid out as a series of arterial roads (Pershore Road, Hagley Road, Stratford Road and so on) which cross the Middleway ring road on their way to the city centre. The roundabouts are known as Circuses, presumably because they’re regularly frequented by clowns. There was once an inner ring road, the infamous ‘concrete collar’ of the Queensway: this was partly dismantled in 2002, but much still remains as a fast motor road.

These busy main roads are famously cycle-hostile and cyclists will need no encouragement to stay away from them when possible. Belgrave Middleway, to the south of the centre, is particularly troublesome – the Gooch Street junction is notorious, despite the cycle crossing. Ladywood Circus, to the west, is another blackspot: the City Council is proposing to add traffic lights and new cycle paths.

Five Ways roundabout (on the Middleway) and Lancaster Circus (on the Queensway) have cycle underpasses which are a must for staying in one piece. Elsewhere, you can sometimes avoid the roundabouts with cut-throughs on local streets: for example, Bordesley Circus can be bypassed via Adderley Street and Kingston Road, or along the Grand Union Canal past Camp Hill Locks.