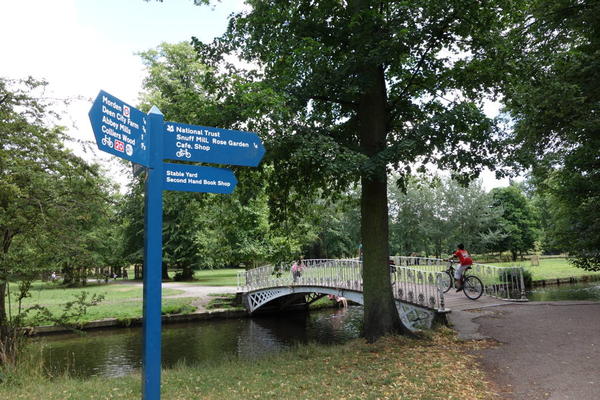 London doesn’t have many off-road trails of the sort that are common elsewhere. The Wandle Trail is probably the best known, running along the valley of the River Wandle in South London.

It begins at the mouth of the river, just west of Wandsworth Bridge. From here it follows a collection of riverside trails, (mostly) quiet roads, and linking paths towards Hackbridge and Carshalton – around nine miles in all. Much of the route forms part of the new Avenue Verte London–Paris cycle route, so don’t be surprised to see cyclists with heavy panniers!

It’s pleasant scenery for most of the way, even if it rarely scales the scenic heights of the River Thames path. The route is consistently signed with a waterwheel symbol and National Cycle Network route 20 numbers. You can easily catch a train back from Hackbridge station.

One word of warning. The Wandle Trail is notorious for its gates, installed to keep motorbike riders out, but a genuine pain in the ankle for genuine cyclists. Don’t expect to cycle at anything more than a slow pace. Cyclists with clipped-in pedals will find the constant clipping/unclipping particularly painful.