End-to-Enders to be signed past Telford 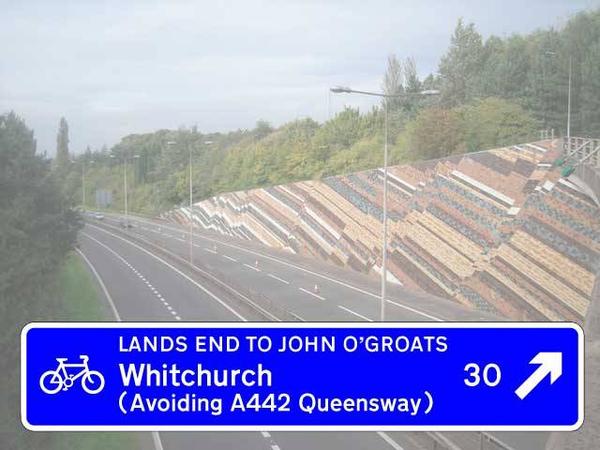 New cycle route signs are being erected around Telford to guide Land’s End to John O’Groats cyclists away from a lethal road.

The A442 dual carriageway became notorious in 2010 when cyclist Arthur Platt was killed on the road. He was cycling from ‘End to End’ to raise money for Help for Heroes. The driver in the accident, Stuart Cook, was subsequently imprisoned for 12 months for causing death by dangerous driving: a court heard how he had leaned down to pick up a satnav which had fallen off his dashboard.

Telford & Wrekin Council is now planning signs to direct cyclists away from the road. Following suggestions from the Telford & Wrekin Bicycle Users Group, they say that long-distance riders would be much safer on the former A442, now declassified – a quieter road via Wellington which avoids Telford.

The signposted alternative route will give distances to Bridgnorth in one direction and Whitchurch in the other, and will be expressly signed ‘Land’s End to John O’Groats’ at each end. In addition, dropped kerbs will be installed to give cyclists safer passage around the roundabout at Stirchley.

Although there is no single official route for ‘LE-JoG’, many cyclists choose to go through the Shropshire borders as a direct and reasonably flat route – taking them directly through Telford.