72% of construction lorries in London crackdown were unsafe 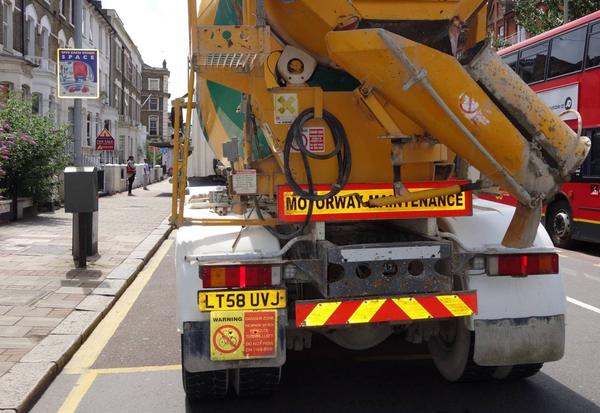 The crackdown on lorries that endanger London’s cyclists is to be extended, following a successful six-month trial. Meanwhile, the London Cycling Campaign is stepping up its campaign to improve HGV design.

Over half of cyclist deaths in London during the last five years involved a Large Goods Vehicle – and over time, the figures were getting worse, not better. A study by Transport for London found that “in 2011, seven out of nine cycle fatalities involved Heavy Goods Vehicles in the construction and waste industries despite HGVs making up only 4 per cent of road miles driven”.

The ‘Industrial HGV Task Force’ was set up in September 2013 to tackle this. Described as “intelligence-led”, its 16 full-time officers work in motorcycle patrols, with Automatic Number Plate Recognition cars, and mobile inspection vans to find dangerous lorries. Highly visible patrols seek to “ensure that the presence of the IHTF is well known to drivers and operators, creating a visible deterrent to non-compliant operators from entering London”.

Over the first six months, the Task Force targeted almost 2,000 lorries. The results were terrifying. Of the vehicles targeted and stopped in the construction and waste industries, 72% were found to be non-compliant. As the study explains:

“This figure is significantly higher than we would expect from general population of commercial vehicles on London’s roads. As a comparator, the Fleet Compliance Check Report found only 9.9% of GB vehicles to be non-compliant.”

Of these, 24 have been seized, 15 owners prosecuted, and 519 fixed penalty notices issued. Common offences were:

Concrete mixers were particularly dangerous, with only one in eight compliant. TfL is to lobby central Government for legislation to be tightened up on these.

“We are determined to do all we can to tackle dangerous HGVs, which are a safety risk to cyclists, pedestrians and other motorists. 'The Task Force has clearly been a great success, but the number of dangerous goods vehicles that have been stopped and fined underlines just how necessary it is for work to continue.”

Transport for London, the Department for Transport and London councils are now proposing a safer lorry scheme. The proposed scheme will require every vehicle in London over 3.5 tonnes to be fitted with sideguards to protect cyclists from being pulled under the wheels. It will also require vehicles to be fitted with mirrors, giving the driver a better view of cyclists and pedestrians around their vehicles. The Industrial HGV Task Force would ensure on-street enforcement of the requirements.

London Cycling Campaign wants them to go further. It is calling for all but ‘direct vision lorries’ to be banned from urban areas. Direct vision lorries have a lower driving position, and large glass areas to the front and side that give the driver a direct view of pedestrians and cyclists in close proximity to their vehicle.

The European Parliament is considering such legislation, but national Governments could prevent this being introduced – and the British Government is one that is currently opposed. LCC is asking cyclists to email their MEPs to express support, helping strengthen their position in the followup negotiations.

Previous story: £32m for Scottish cycle routes
Next story: End-to-Enders to be signed past Telford