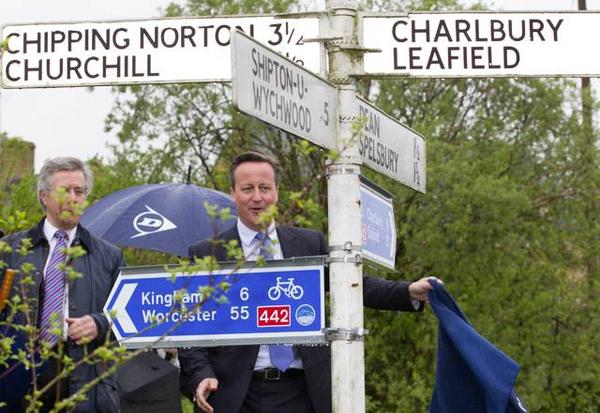 The 77-mile route runs from Oxford to Worcester on quiet lanes and traffic-free paths, in parallel with the rural railway known as the Cotswold Line – and travelling right through the heartland of the so-called ‘Chipping Norton Set’.

Unveiling a trademark National Cycle Network sign pointing the way to Oxford and Worcester, as well as nearby stations at Charlbury and Kingham, the Prime Minister described the National Cycle Network as a “national treasure” and said that this latest addition was a “delightful route” – describing how it follows roads that he regularly cycles with his family. Asked if Boris Johnson might also enjoy the route, he replied “I think it might be a bit hilly for Boris”.

The launch took place in the village of Chadlington, a few miles from David Cameron’s constituency home. Local Sustrans volunteers and cyclists crammed around the village green and the popular, bike-friendly Café de la Post to hear speeches from the Prime Minister and Sustrans chief executive Malcolm Shepherd.

The route was devised and signposted by local volunteers, with funding from the Cotswolds Conservation Board (which looks after the Cotswolds Area of Outstanding Natural Beauty), train company First Great Western, and local charity Charlbury & Overseas Community Projects – the grant-giving arm of the Charlbury Beer Festival.

The funding covered signposting between Hanborough and Honeybourne stations. Evesham to Worcester had already been opened by Worcestershire County Council, leaving two short sections (Oxford to Hanborough, and Honeybourne to Evesham) currently unsignposted.

Here at cycle.travel we’re particularly delighted to see the route opened, as we’ve been involved in its creation and it runs directly past our base in Charlbury, Oxfordshire – wave as you pass by!