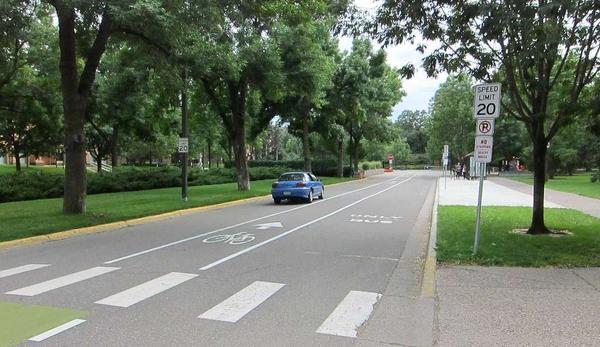 Cyclists have long believed that building bike lanes doesn’t cause car congestion – and now there are figures to back this up.

Famed data journalism site FiveThirtyEight, whose founder Nate Silver is famed for accurately predicting the results of US presidential elections, looked at traffic flows in Minneapolis before and after bike lanes were installed. The Minnesota city vies with Portland, Oregon for the title of “cycling capital of America”.

Using official traffic data, they examined 10 roads where a bike lane has replaced a car lane, and measured the “volume-to-capacity” ratio. As they explain:

“We take an estimate of the number of cars traveling in the busiest direction during peak travel time, and divide this by each road’s capacity. This gives us what traffic engineers call the volume-to-capacity ratio, or V/C ratio. This metric tells us how ‘full’ each road is.

The results were startling. Of the ten streets, only one road (19th Avenue S) had free-flowing traffic before the bike lanes were painted, but “mild to moderate congestion” afterwards. Its 0.62 score was still comfortably within the “moving smoothly” category. But eight others remained comfortably below 0.5, with the last just at the border.

FiveThirtyEight’s authors, Gretchen Johnson and Aaron Johnson, say that the trick is to choose roads that are already running below capacity:

They don’t believe this is an isolated occurrence. In New York, where new bike lanes have attracted significant controversy, the same pattern was observed. Two busy junctions were still largely uncongested after the bike lane was installed, just shading above 0.5 in the rush hour.

More to the point, not only did car drivers enjoy a similar journey time to previously, but other users benefited greatly. “The number of cyclists using the road went up, and speeding cars, cyclists riding on the sidewalk and injury-causing accidents went down. The road diet isn’t just creating a space for bikers; it’s also making the street safer for other types of users.”