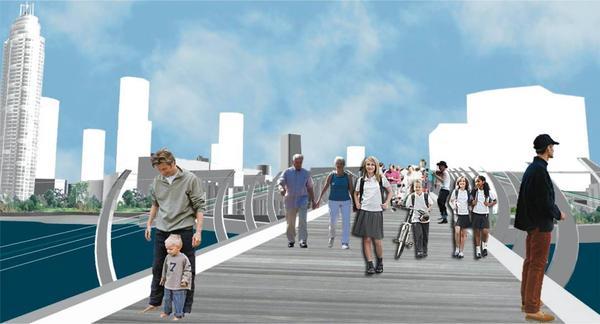 Plans for a new cycle bridge across the River Thames in London are facing opposition from Westminster City Council – because local gardens and a yachting base would be affected.

Transport for London is planning a new bridge between Nine Elms, by Battersea Power Station, and Pimlico. Nine Elms is being extensively redeveloped, and cycling improvements are a key part of the proposals.

The preferred location for the bridge is from the American Embassy, on the south bank, to Pimlico Gardens on the north side. However, Westminster City Council – generally thought to be the least bike-friendly of all the London councils – is campaigning against this location. They say:

“Officers remain unconvinced about the need for a new bridge and continue to reiterate Westminster’s serious concerns about the likely impact of the bridge in the proposed location (residential amenity, highways impact, loss of public open space and trees etc). Our preference, should proposals for such a bridge proceed, is for an alternative location adjacent to the existing Grosvenor Rail Bridge. No funding has been secured to date and formal consultation will not take place until June 2014 at the earliest.”

Westminster’s approach to the new bike bridge contrasts with their attitude to the proposed (pedestrian-only) ‘Garden Bridge’ across the Thames, which they describe as “overwhelmingly supportive”.

Local Liberal Democrats are also opposed to the new bridge. They say:

“We have been very concerned re: the impact of this option on the local road network and the environment on the north side of the river, notably on the existing open spaces and trees in Pimlico Gardens. Some trees would have to be removed. There would also be a significant impact on the Westminster Boating Base, and residential amenities would be affected as well. The Westminster and City of London Liberal Democrats, along with Westminster Council, have suggested that a more suitable location for the bridge would be adjacent to the existing Grosvenor railway bridge. This would better link the Battersea Power Station with Victoria. It would also be cheaper and greener.”

TfL has acknowledged the Grosvenor railway bridge alternative as a possible alternative to the all-new bridge. Its location close to Chelsea Bridge would mean that fewer new journey opportunities were opened up for cyclists, whereas the new bridge would link with the proposed Cycle Superhighway 5 in Pimlico, which has been altered to run up Belgrave Road. However, those arguing for the Grosvenor option say that it would be more convenient for Victoria railway station.

The bridge is expected to carry 9,000 cyclists and 9,000 pedestrians every day. It would be 7.5m wide and would cost an estimated £30m to construct. No funding has yet been identified for the project.