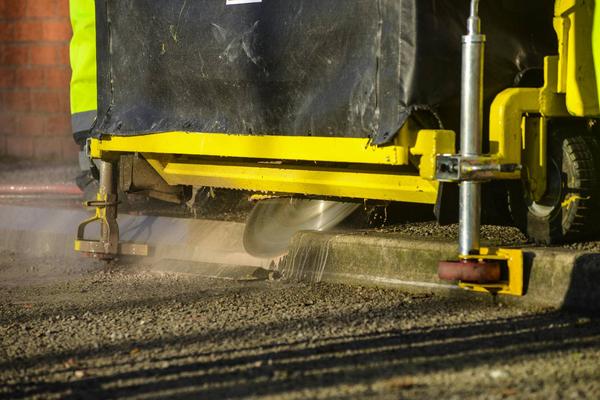 Standard vertical kerbs reduce the width available to cyclists, and make it more difficult to pass on and off the cycle track. Sloping kerbs, as used elsewhere in Europe, are better for bikes – but when road space is being ‘reallocated’, a straight kerb might already be in situ.

A Coventry firm has now invented a drill which converts straight kerbs to sloped ones, making them bike-friendly in a matter of minutes. The Cyclpath – devised by D-Drill managing director Julie White and her father and former owner of the business, Peter – means that kerbstones which until now would have to be replaced involving road closures, excavating and disposal in landfill, can simply be cut and remain in place.

The Whites devised the machine when the company was approached to see if it could angle-cut a kerb by a contractor creating one of London’s new Cycle Superhighways. Aptly named the ‘Cyclpath’, its first job was to cut 20 metres of granite kerb just off Piccadilly Circus, Central London, on behalf of Westminster City Council to avoid closing off the road. Once the kerb has been cut to shape, a vapour-blast machine provides an finish and texture in keeping with the rest of the street.

“When we were originally approached, I presumed there would be a machine on the market. When I explored the UK and found nothing, I tapped into my contacts in the USA and elsewhere in the world and everyone was drawing a blank. Within a couple of months, we’d got a working prototype and then the first ever Cyclpath which we have patented.

“We are really excited by what this new machine could lead to because it is perfect for cutting angled kerbs for cycle paths – that was, in fact, what the original enquiry was about – and there is really healthy interest from councils and highway teams around the UK.”

The Cyclpath has also been demonstrated to Coventry City Council, who may now trial it in the city. Rob Little, senior engineer at the council, said “I hope we can arrange a trial on a road in the city so we can see how it works on a kerb that’s been in place for some time”.