New Superhighway could be best yet 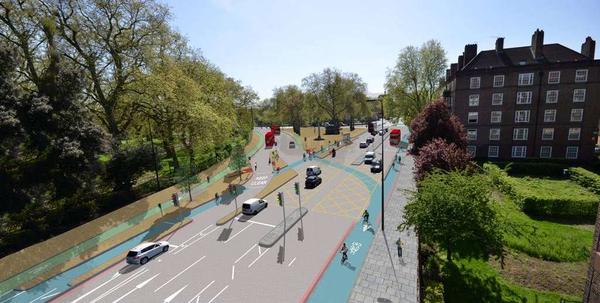 Transport for London has released its plans for the Oval–Belgravia bike route, Cycle Superhighway 5 – and it looks like they could be a step-change in conditions for London cyclists.

The new route would be segregated from motor traffic almost all the way, including the crossing of Vauxhall Bridge. At the same time, the notorious junction at Oval would be redesigned to provide segregated bike lanes and special bike-only traffic light phases.

The main route would be a two-way segregated track – in other words, northbound and southbound cyclists would use the same side of the road. Junctions would be redesigned along the route, and cars banned from making several turns. Even though TfL admits that “the completed scheme would mean longer journeys at busy times for most motorists and bus passengers in the Vauxhall area”, it believes it’s worth it for the “major improvements in safety and comfort for cyclists”.

If the plans are approved, construction will start in October this year. TfL is inviting comments on the designs at its dedicated consultation pages (CS5, Oval), especially on the choice of route north of Vauxhall Bridge, where three possibilities have been identified.

Cycle campaigners have generally welcomed the plans. Danny Williams, author of the Cyclists In The City blog, wrote:

“What TfL is – at last – proposing here is pretty magical. I have to say this is, in my view, best-in-class cycle infrastructure. This thing makes me grin like Christmas has come early.”

The plans will be on show at exhibitions locally throughout July.