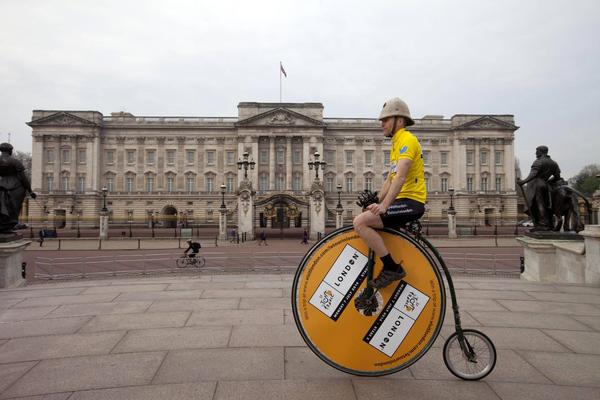 We’re always slightly in awe of the pro cyclists who ride the rough cobbles of Belgium at ridiculous speeds… but to do it on a penny-farthing leaves us speechless.

That’s the challenge taken on by Londoner Joff Summerfield, who previously circumnavigated the globe on his old-fashioned bike. Now, to promote the Tour de France’s visit to London this year, the 46-year old is planning to ride the course of the ‘Spring Classics’ pro races.

The London-based athlete spent two and a half years travelling through 23 countries on four different continents riding a penny farthing that he built himself. His new challenge is shorter, but no less difficult, with bone-shaking cobbles, steep hills and daring sprints.

Summerfield and his high-wheel bicycle will attempt to ride the punishing short stage Sportives at some of the most famous one-day cycling road races in the world including the Tour of Flanders, Paris-Roubaix and Liege-Bastogne-Liege – all in celebration of the Tour de France Stage 3, which will see the world’s cycling elite take to the iconic streets of London this July. He said:

“The famous cobbled roads and the steep hill climbs of these European Spring Classics are going to test me and my penny farthing to the limit. I am really looking forward to taking on these very challenging routes and meeting some of the pro riders along the way. The Tour de France coming to London is going to be an incredible celebration of cycling. I’m proud to be doing my bit to inspire and invite people to come to the capital this summer to see the world’s cycling elite take to the city’s iconic streets, and perhaps go even further and take on the same route as the pros with RideLondon.”

Cycling fans are invited to enter a competition to win a trip to London to watch Stage 3 of the Tour de France by tweeting a picture of Joff on his penny farthing, themselves with a Tour de France picture board, or on their own bicycle to @visitlondon using #letourinlondon or via www.visitlondon.com/letourinlondon. The Tour de France Grand Départ 2014 sets off from Yorkshire on Saturday 5 July and Sunday 6 July, with the peloton of 200 pro riders speeding into London via Cambridge and Essex for the finish of Stage 3 on Monday 7 July.

On completion of his Spring Classics challenge, Summerfield plans to travel the world again in May this year – on his penny farthing once again.