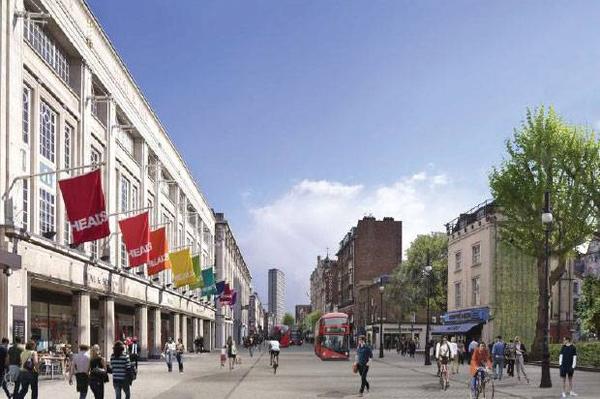 Camden’s £26m plans for the area would see cars banned from the road between 8am and 7pm every day.

In itself this won’t create a cycle panacea – because the street will be busy with two-way bus traffic. However, the parallel roads of Gower Street and Shaftesbury Avenue will be given “protected cycle lanes”, creating a high-quality bike route from Euston to the West End.

This route will cross the existing popular Torrington Place route (‘Route 0’), opening up more opportunities for safe cycling in London. However, Camden’s proposals carefully state that the route will be “protected” rather than “segregated”, suggesting that lightweight rubber ‘armadillo’ barriers will be used rather than full Dutch-style kerbs.

Loading will be restricted to 10am-2pm on Gower Street, reducing the chance of the cycle lanes being blocked. There will be no bus services on the Gower Street route, and therefore no need to accommodate bus stops. Both the parallel route and Tottenham Court Road will be two-way streets, rather than one-way as at present, but Camden expects traffic to drop on both of them.

The proposals have been prompted by the arrival of Crossrail at Tottenham Court Road station in 2018, which Camden claim will become “busier than Heathrow Airport”. Over 300,000 passengers are expected to use the station every day by 2026.

Other improvements on TCR will include pavements widened by up to 5m, tree planting, and new green spaces on side roads. The council believes that the road is not currently fulfilling its commercial potential, saying that adjacent businesses provide 20% of the West End’s floor space, but account for only 6% of its spend.

Consultation will begin on the project on 9th June. If it gets the go-ahead, work could be complete by 2018.

The initial plans have been welcomed by the Green Party, but public comments on the ITV website were predictably scornful, with one commenter asking “So how are all the shops gonna be stocked? If anything pedestrians should be banned from the road.”

See video of the proposals