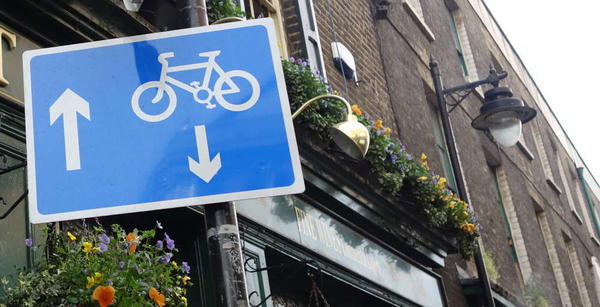 Twenty-two streets in the City of London have been given cycle contraflows, so that cyclists can ride the ‘wrong way’ up one-way streets.

The aim is to provide alternative, quieter routes to some of the busiest streets in London’s financial district. The City of London says that cycle contraflows “reduce journey distances and times for cyclists, while maintaining functionality for all road users”.

The 22 streets in question are:

Work was carried out at the end of February, comprising new signage and road markings.

Up to 11 more streets are planned to follow this summer. See the map of affected streets. We will, of course, be updating our journey-planner to take these new opportunities into account just as soon as the data is in OpenStreetMap!

Previous story: Brighton 20 limit to be extended
Next story: Coals to Newcastle, English bike routes to the Dutch