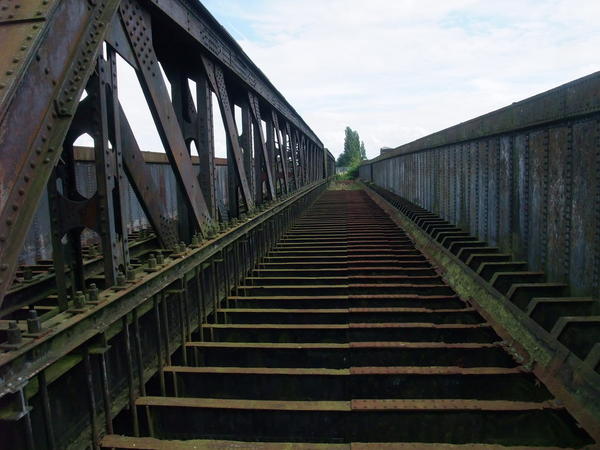 A long-disused railway viaduct over the River Trent is being restored – to save cyclists an 11-mile round-trip.

Torksey Viaduct, near Lincoln, was built in 1849. It was designed by John Fowler, architect of the Forth Rail Bridge, and was one of the first steel girder bridges ever built. The nearest crossings are the busy A57 road at Dunham, five miles south, and Gainsborough, seven miles north.

The bridge is being reopened by Sustrans initially as a walking route, but with a long-term plan to create a cycle route on the quiet lanes between Lincoln and Retford. To begin with, wooden steps at the west end of the viaduct mean that cyclists will have to manhandle their bikes across.

Structural restoration work has been carried out by Sustrans’ sister charity, Railway Paths Ltd. Work had previously been stalled by landowner opposition.

Previous story: C﻿ycling is so bracing
Next story: S﻿cotland takes the long-distance route

"The nearest crossings are the busy A57 road at Dunham, five miles south, and Gainsborough, seven miles north." How are you measuring that? I reckon the Dunham bridge is more like 3.5 miles south, with the demotorised Fledborough viaduct only five miles south?

More routes are always good, though!

Excellent news - route 647 over the Trent at Fledborough and now Torksey viaduct should create some good circular routes, the network of lanes and byways west of the Trent are great.