Yes, although it switches between 1, 30 and 11 on the way round. It's National (red) Cycle Route 1 from Lynn to Wighton near Wells, then Regional (blue) Route 30 to Yarmouth, National 1 or 517 to Lowestoft (except for our Ness Point and Marine Parade detours), Regional 30 to Weeting near Brandon, Regional (30) to Denver near Downham Market, National 11 to Watlington, 30 to Lord's Bridge and then 1 back to Lynn.

Lynn to Cromer and Brandon to Lynn are. I'll edit this about the rest next month!

National Cycle Route 1 joins it from the northwest and midlands at Lord's Bridge between Watlington and Lynn, or from the southeast at Beccles. Route 1 can also be used to make a shorter loop or longer 8 shape by connecting Wells to Beccles via Fakenham Norwich. More direct access from London and Cambridge is offered by Route 11 which joins the route at Denver near Downham Market (but this has been declassified by Sustrans in July 2020, so its exact route may change). Finally, Route 13 from Colchester crosses the route near Thetford and connects to Route 1 at Fakenham, while the Peddars Way MTB route connects Thetford to Sedgeford near Ringstead.

The suggested start/end of the route is a town that most car tourists now drive straight past on their way to the coast — unless they get stuck in the notorious summer Saturday traffic jams which we can avoid — and they're missing a gem of an old walled market town, with a medieval Saturday Market Place, Town Hall and Minster at one end of the centre, a Tudor Tuesday Market Place with Victorian Corn Exchange at the other and modern shops along the (no cycling since 2018) High Street between the two.

At the end of the loop, the view entering the town is stunning but the signposted route through the very centre doesn't show you much, so I suggest you keep/turn left when the route signs direct you right near Whitefriars Gate and follow the river onto South Quay past the old Hanseatic Warehouses (the only surviving ones in the country) to the Custom House often used as the town's symbol, then keep left to visit the Tuesday Market Place at the end of the road before making a U-turn and letting the one-way system take you to the Saturday Market Place where you can rejoin Route 1 after the Minster to weave between shops, car park and bus station to the rail station. 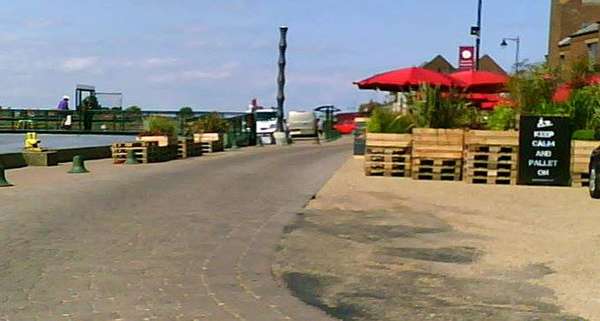 From the rail station, head towards the nearest church (St John's) and turn left into The Walks, then cross the railway with care and join the Sandringham Railway Path out of town onto a mix of cycleways and fairly quiet roads to an island crossing of the busy coast road on the edge of Sandringham itself.

After a mile in the pine forest and the surprising Donkey Pond Hill, a wide drive leads to the visitor centre. Take the first car park entrance and ride round the closed gate ahead if you wish to refill your water bottle. There is cycle parking between the cafe, ticket office and toilets - the Queen's Sandringham House and Gardens is relatively expensive to visit (as is the cafe) but can easily fill half a day if you visit all the museum.

Once you've seen enough, rejoin the road and follow Route 1 onto rolling small hills past the sawmill and northwards. Keep an eye out for Boston's "Stump" and Skegness on the Lincolnshire coast across the Wash on clear days, Snettisham Church with its landmark 52m spire, and Snettisham Park Farm's cafe is another good refreshment option near the route, or there are some small shops, a pub and a cafe on the nearby High Street.

As you enter the village, there is a gravel car park on the left for a nature reserve which has a picnic area in a former quarry. A gravel road leads through the Ringstead Downs reserve and eventually connects to Downs Road in Hunstanton, but the seaside resort can also be reached by following the main road uphill through the village past the Gin Trap pub, the village stores and the church, then following the road sign to Hunstanton. At the end of that, a few hundred metres left on the coast road brings you to a crossroads where all three ways lead to different parts of the town, with the left arm being by far the quietest and the right is the shortest way to the beach.

After Ringstead, Route 1 rolls along a lumpy ridge about two miles inland from the coast road. The riding is fairly gentle and the sea views are good but there is nothing much before Burnham Market. If you need something before then, quiet roads allow loops to visit Thornham Deli, Titchwell RSPB, or Burnham Deepdale cafe and return to the route without riding on much of the busy coast road.

Burnham Market, sometimes known jokingly as Chelsea-on-Sea, is the fashionable resort on this stretch of coast. Annoying to reach by train and bus, changes have recently been made to encourage people to park large urban 4x4s away from the central green and seasonal stream, where a 20mph zone and painted footways have helped to reclaim the area a bit for the cafes and shops around it. Our route still prefers to turn right just before entering the green and use the quieter Station Road to head towards sleepier Burnham Thorpe.

Still much smaller, Burnham Thorpe was Admiral Nelson's birthplace, but the nearest statue is in Norwich. The main memorial to him here that you'll see is the village sign, which is almost all about Nelson.

Two shortcuts are possible at Holkham's back gate: either follow the Route 1 signs forwards to bypass both Holkham and Wells, or continue straight on and instead of turning left ahead, follow road signs for Wighton to also bypass a gravel section.

It is worth following at least some of the Holkham/Wells circular if you can. Turn left and enter through the awkward gates, if possible (it is sometimes closed and the signs covered) and ride along the avenue to the obelisk, then descend towards Holkham Hall and its cafe and frequent cafe or ice cream stalls.

The signposted route continues down the drive, across the coast road and then over sand to Wells Beach Cafe and back along the harbourside road. Alternatively, if the weather has been wet or it's crowded, or you just don't like sand, you can follow the quieter unsigned road due east just to the right of some woodland and arrive in Wells near its community hospital, but a short ride either way on the coast road will be needed to reach the town centre and head for the harbourside.

King's Lynn, Watlington and Downham Market on the west of the loop are served by direct trains from London King's Cross which don't require reservations but also require most bikes to be left in only a couple of multifunction spaces or the unused doorways which can mean moving them around during the journey. Changing at Ely connects these to trains from the midlands. I recommend using King's Lynn station so that the ride starts with the famous route to Sandringham and finishes with a great view of the town.

On the south of the loop, Diss is served by direct trains from London Liverpool Street towards Norwich which require reservations but have recently been upgraded to have six spaces per train and level access from platforms.

Cromer, Great Yarmouth and Lowestoft have trains from Norwich, while Thetford and Brandon can be reached from both Norwich and Ely. Most of these use regional trains that are a shorter bi-mode version of the London trains that still have six bike spaces, but do not offer reservations. These services may be more useful if you have to cut your trip short, rather than as a planned start/end point.

Bikes on trains: Bike and Go-ne

The text of https://cycle.travel/advice/cycling_by_train mentions Bike and Go, but that dysfunctional service has now Bike and Gone! It's closed! It is an ex-service!

The regional and local route names/numbers don't seem to be displayed on cue sheets. They would be very helpful because a stream of "turn left/right onto cycleway" is hard to follow.