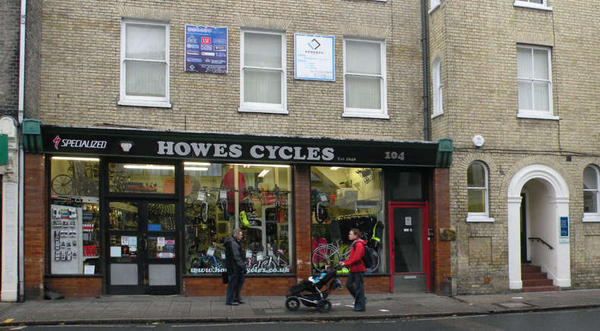 Howes Cycles of Cambridge, said to be Britain’s first bike shop, is closing its doors after 173 years.

The shop, on Regent Street, was set up in 1840 by coachbuilder John Howes. It has remained in the family ever since, with the business passing down to great-great-great-grandson Michael Howes.

But at the age of 65, John and his wife Pat are finally ready to retire. He told the Cambridge News that he had no plans to sell: “if your surname is not Howes, you’re not taking over”.

Generations of Cambridge students and academics have bought bikes from the shop, with Charles Darwin one of the more notable customers. An old-fashioned bike shop in the best sense, Howes currently sells everyday bikes from Ridgeback and Dawes together with sportier models by Specialized. All this will come to an end on December 31st, the last day of trading. Howes’ stock will be sold off at “greatly reduced prices” in the run-up to Christmas.

The announcement comes just two months after another long-established bike shop, W.F. Holdsworth of Putney, announced its closure. But there’s still a place for the LBS (local bike shop) in the age of chains and Internet shopping, and cycle.travel will be adding city-by-city listings of bike shops in the coming weeks so you can easily find a dealer near you.

Previous story: Swindon cyclists raise funds for hospital
Next story: For the city with everything: a bike lane sweeper