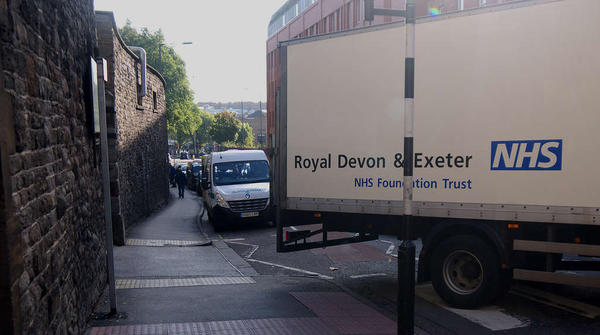 Boris Johnson might be unconvinced by the merits of an HGV ban on London’s streets, but Bristol’s mayor George Ferguson is strongly in favour.

At a question and answer session organised to debate the city council’s budget cuts, the mayor – a founding member of Sustrans – came out strongly in favour of a more cycle-friendly city. And as the Bristol Post reports, that includes a lorry ban.

“I think we should ban HGVs in peak hours because they are a menace. Relatively small supermarkets are [currently] serviced by massive HGVs. The items should be transferred to smaller vehicles, preferably electric ones, at a transfer station like the one we have at Avonmouth.”

HGVs have been involved in most of the recent cycling deaths in London, but Boris Johnson and his cycling commissioner Andrew Gilligan have proved unreceptive to calls for a peak-hour lorry ban.

George Ferguson also told the session that a new residents’ parking zone in the suburb of Montpelier could encourage more locals to cycle. Unrepentant in the face of an accusation that the zone would stop people owning cars, he answered: “People may have to decide ‘Do we need a second car? Could we car share or cycle?’.”

Previous story: Just in time for Christmas: the flat-pack bike
Next story: The grand old city of York has 1,000 bike spaces