Your routes around Bristol

New ‘radial routes’ make it easy to get between Bristol city centre and the suburbs. They vary in quality and in directness, but form a useful starting point for getting around town.

East Bristol to the city centre 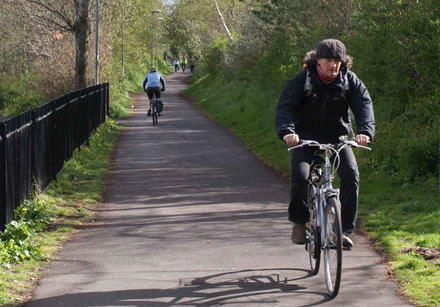 The Bristol–Bath Railway Path is possibly Britain’s finest urban bike route and certainly Bristol’s. It’s flat, uninterrupted tarmac (save the very occasional road crossing) all the way to the ring road, from where it makes its way to Temple Meads and the city centre on small roads and cycle paths. The route is genuinely very busy throughout the day, but particularly at commuter times: take care and watch your speed.

The path is easily accessible from places like Staple Hill and Fishponds via the road network. There are also a few dedicated cycleway links, notably from Mangotsfield.

Bradley Stoke and Filton to the city centre

The Concorde Way gets its name from the supersonic airliner that was built in Filton and, fittingly, landed here after its final voyage. The cycle route, a collection of traffic-free paths and minor roads, is rather less speedy; that said, it provides a safe cycling alternative to the A38 and its ceaseless traffic lights.

The paths are generally of good quality, though the subways under the motorway junction are rudimentary. The route passes Filton Abbey Wood station for combined bike/rail journeys.

Henbury and Westbury-on-Trym to the city centre

The Downs Way is the new name for the long-established National Cycle Network route 4 into the city. It’s essentially just a set of residential roads joined together; still, the section across the Downs and along Hollybush Lane is enjoyable, and the extra mile on the five-mile journey is arguably worth it to keep away from the busy A4018.

As an alternative route between Henbury and Bristol, you can use the permissive road through the grounds of Blaise Castle. This is slightly shorter, has the same amount of climbing, and avoids some of the faffing on residential roads.

Whitchurch and Brislington to the city centre

The cycle path along the River Avon provides an easy way into the centre from eastern Bristol. Residential roads connect this to the Whitchurch Railway Path, a short (one mile) but useful traffic-free route paralleling the A37 Wells Road. The railway path was extensively upgraded as part of the Cycling City programme, being widened, resurfaced and regraded. It’s signposted as part of National Cycle Network route 3.

Nailsea and Long Ashton to the city centre 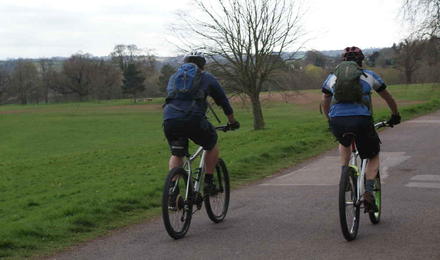 Getting into town from Long Ashton is both easy and picturesque thanks to the new Festival Way cycle route, through the heart of Ashton Court. It is a little hilly, though, and you may choose to follow the cyclepath along Ashton Road and Brunel Way before rejoining the route by the playing fields. A disused railway bridge then takes you across the Avon, from where the riverside path leads to Harbourside.

Signposted as National Cycle Network routes 33, this route actually continues all the way out to Flax Bourton and Nailsea, making it a feasible option for medium-distance commuters.

Stapleton and Stoke Park to the city centre

As an alternative to the Concorde Way from Filton, the Frome Valley Greenway runs slightly to the east, starting at Stoke Park. The riverside section is very pleasant, though inevitably there’s a climb once you get away from it! Take care at the awkward motorway crossing, where there’s a shared use path along Stapleton Road. The route joins the Concorde Way at St Werburghs.

Hartcliffe and Bedminster to the city centre

The Hispanic-sounding Malago Greenway is actually named after the tributary of the Avon that rises just south of Bristol. (The river is built over downstream of Bedminster, so hard to trace.) Much of the route is traffic-free, with a new cycle path along Hartcliffe Way providing a safe alternative to this busy road. It’s reasonably direct, too, and no hillier than it needs to be: the route falls slowly and steadily from Hartcliffe. You arrive in the city centre at Prince Street Bridge having crossed the Avon on Gaol Ferry Bridge.