The grand old city of York has 1,000 bike spaces 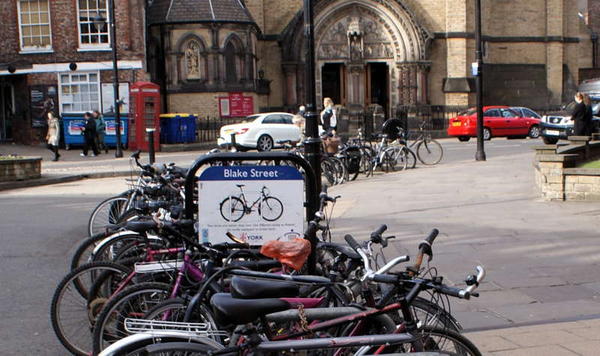 York City Council has installed a clutch of new cycle racks in the city centre, bringing the total number of parking spaces to over 1,000.

The council says the number of spaces has grown by 18% in 2013, by adding new cycle racks and extending existing ones. There are brand-new racks at Goodramgate, Piccadilly, King Street, North Street, the Nunnery Lane car park, Micklegate, and outside the Post Office on Lendal.

The £25,000 cost was budgeted as part of the city’s Local Transport Plan. According to Councillor Dave Merrett, “We need to keep up with demand to make it as convenient as possible for people to choose cycling – and also so that cycles aren’t parked in inappropriate places, such as on railings.”

Local business owners seem happy too, with the manager of Jack Wolfskin, Tim Lewis, calling it a “welcome addition for several members of staff who cycle to work”.

Still, York has a long way to go to catch up with Cambridge, which has 800 spaces in just two locations – Grand Arcade and Park Street – and is building a 3,000-space bike park at the railway station.