Riverside routes and new bridges provide enjoyable traffic-free journeys once you know your way around, though the narrow historic streets aren’t always the most comfortable places to mix with cars.

York has a number of good-quality traffic-free routes. Its major innovation is the Orbital Route, a bike ring road with 26 numbered junctions. At each one, signs point along cycle routes to the city centre and out to the suburbs.

The Orbital itself is a patchwork of roadside paths, residential roads and traffic-free sections. Though this means there are a few too many crossings and turns to get anywhere fast, it’s a clear, simple concept that will help you find the best routes around town.

York is bisected by the River Ouse, and riverside paths run alongside it both north and south of the centre. There’s no path in the very centre, though, so you’ll need to take the road route on the south/west bank. To the north, the traffic-free route contniues to Clifton and out towards Beningbrough, while southbound it reaches Bishopthorpe and Selby. The new Millennium Bridge in the south of the city provides an excellent link between the two riverside paths, but it’s a shame there’s no equivalent in the city centre: you’ll find yourself manhandling your bike over the narrow, stepped Scarborough Bridge.

From the University, an excellent route runs west over the pretty meadow of Walmgate Stray, heading for the river at the Millennium Bridge. (There’s also a direct, though busier, route via Heslington Road.) A cyclepath snakes around the campus to the Science Park, but keep your eyes open at bends – it’s busy and narrow, so you can’t cut corners. 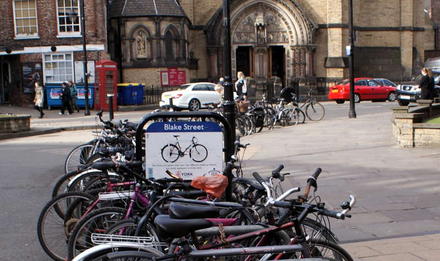 York has perhaps the highest amount of bike parking per head of population anywhere in Britain. The railway station has 500 alone, there’s another thousand dotted around the city centre, and many employers and schools provide secure parking. Indoor valet parking is now available at the Hub Station, a community enterprise on the riverside at Lendal Bridge (south bank) which also provides showers, toilets and bike repairs.

A CTC survey showed York to be the safest place to cycle in Britain, and just a few minutes in the town will demonstrate that it’s much less stressful than London. There’s a courtesy in car/bike interactions that doesn’t exist in many other cities. But that’s not to say it’s all easy.

The one-way system around Fishergate and Fawcett Street, aka the ‘Fishergate Gyratory’, is a notorious junction. New crossing improvements have eased the situation a little, but we’d still suggest finding an alternative route if possible. South of here, Fulford Road (the A19) is busy and difficult, despite on-road cycle lanes, and you may prefer to travel a little further to use the riverside path.

On the opposite side of town, Bootham Bar (west of the Minster) may be picturesque but also has a poor safety record, with cars regularly running the red lights.

You’ll need to keep your wits around you either side of the railway station – that is, from Queen Street, over Lendal Bridge, up to Museum Street. The narrow road is invariably full of traffic, not least buses turning and pulling out. 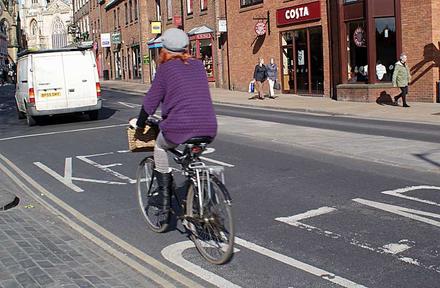 York’s city streets are narrow. They make for great photos, but not always great cycling. As soon as you enter the city centre, you’ll find yourself squeezing past queueing traffic, bumping up and down off the pavement, and sometimes simply getting off and pushing.

Bike lanes are painted on many of the roads, but sometimes more in hope than expectation. In particular, there simply isn’t enough room for bus and bike next to each other – and York has plenty of buses, particularly around the station area. The good news is that York’s drivers are more alert to bikes than most.

Once you get out of the centre, though the roads are a little wider and the back-streets quieter, you still need to choose your route carefully. Be especially wary of the major arterials leading into the city. York is largely flat; the university is on Heslington Hill, but you’ll barely break sweat crossing it.

The city shopping streets are pedestrianised – in local jargon, ‘footstreets’ – which means they’re closed to cyclists between 10.30am and 5pm. Inevitably, this makes crossing the centre tricky; your choices are North Street on the opposite bank, Deangate past the Minster, or pushing. Cambridge and Bristol have shown that bikes can mix with pedestrians on city centre streets: York would do well to follow suit.

Streets in the South Bank area now enjoy a 20mph limit, but no others – though city centre traffic is often at a crawl anyway.

The city’s Park & Ride sites all have reasonable cycle route connections, and there are bike racks and lockers at all of them. You can park your car and cycle into town, or conversely, leave the bike here and take the bus in.

With 20% of journeys in York being made by bike, a vibrant culture has grown up around cycling in the city.

There’s an annual York Festival of Cycling, a family-focused event with traffic-free rides and stunt displays. Until 2012, the CTC held its national rally and show here. Other events include the York Cycle Challenge, where employers aim to have the highest proportion of cycling workers.

For those of a sporty disposition, there’s a closed road circuit at the Sport Village, on the ring road beyond the University, and an off-road track at Rawcliffe Country Park.

Your Bike Shed is York’s new cyclé cafe, combining great coffee and cake with bike repairs. If you’re riding out for the day, the local CTC has also produced a bewilderingly comprehensive list of cafés in the area.

Bike theft is inevitably a problem. Operation Spoke is an ongoing initiative to mark bikes and register them electronically. Local police have also been ‘tagging’ badly parked bikes with little advice slips to warn cyclists when their bikes are at risk!