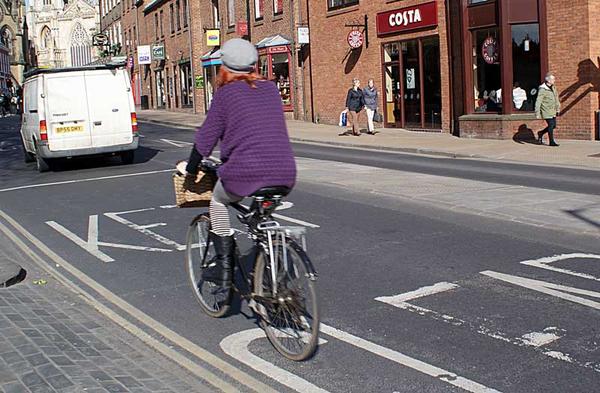 York’s city streets are narrow. They make for great photos, but not always great cycling. As soon as you enter the city centre, you’ll find yourself squeezing past queueing traffic, bumping up and down off the pavement, and sometimes simply getting off and pushing.

Bike lanes are painted on many of the roads, but sometimes more in hope than expectation. In particular, there simply isn’t enough room for bus and bike next to each other – and York has plenty of buses, particularly around the station area. The good news is that York’s drivers are more alert to bikes than most.

Once you get out of the centre, though the roads are a little wider and the back-streets quieter, you still need to choose your route carefully. Be especially wary of the major arterials leading into the city. York is largely flat; the university is on Heslington Hill, but you’ll barely break sweat crossing it.

The city shopping streets are pedestrianised – in local jargon, ‘footstreets’ – which means they’re closed to cyclists between 10.30am and 5pm. Inevitably, this makes crossing the centre tricky; your choices are North Street on the opposite bank, Deangate past the Minster, or pushing. Cambridge and Bristol have shown that bikes can mix with pedestrians on city centre streets: York would do well to follow suit.

Streets in the South Bank area now enjoy a 20mph limit, but no others – though city centre traffic is often at a crawl anyway.

The city’s Park & Ride sites all have reasonable cycle route connections, and there are bike racks and lockers at all of them. You can park your car and cycle into town, or conversely, leave the bike here and take the bus in.