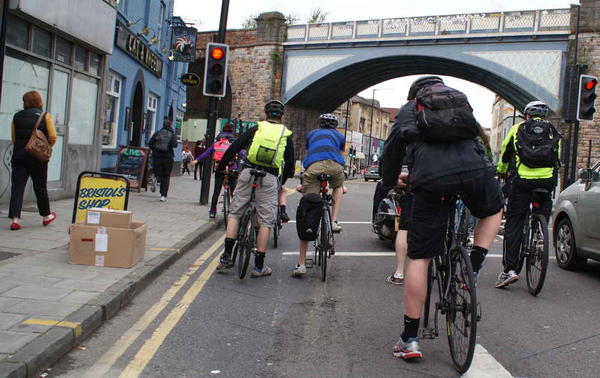 Bristol’s major roads are largely untamed. Many have partial cycle lanes, usually shared with buses, but the sheer weight of traffic in this dense city never makes for a relaxing ride.

Fortunately, you’re not alone: thousands of cyclists take to these roads every day. At rush hour, Stoke’s Croft, Cheltenham Road and Gloucester Road are a tidal wave of bikes, advancing light by light up the hill. Though cyclists can use the bus lane, car parking is permitted in it for most of the day – so you may end up dodging in and out more than you’d like. (This, surely, is one road where a segregated cycle track would make a huge difference.)

It’s a similar story on the climb up to Clifton, through College Green and Park Street. Cars and buses dart in and out as cyclists labour up the hill. It’s often possible to string together a back-street route, but Bristol drivers know the rat-runs too; what looks like a neat alternative on the map may not work in the flesh.

In the city centre, much to Bristol’s credit, cycling on the pedestrianised streets is generally permitted. Cycle contraflows on one-way streets are common. All of this helps to avoid the Inner Ring Road, which is no place for a bike – though you’ll invariably need to cross it at some point. (The Bristol Cycling Campaign has proposed a traffic-free ‘Inner Loop’ to provide a safer option.)