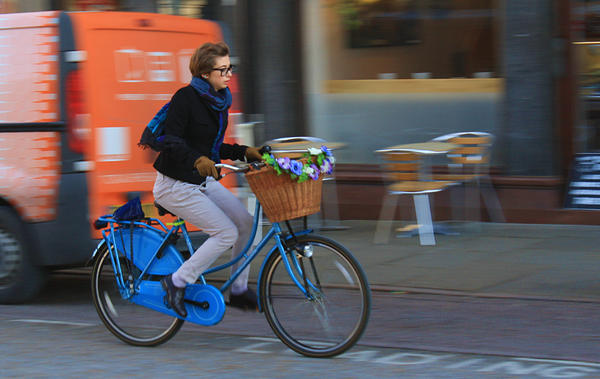 Most journeys around Cambridge will be largely on road. It might not be Dutch-style cycling nirvana, but the roads have been tamed such that it’s better than pretty much anywhere else in Britain.

Cars are kept out of the city centre, but the pedestrianised streets are open to bikes – with a few exceptions, principally Petty Cury. The one-way system still applies: westbound on Sidney Street, eastbound on Trinity Street.

Elsewhere, traffic is funneled onto the main roads by one-way systems, traffic calming and blocked-off roads. The back streets are therefore mostly free of fast traffic, and cycling there is a comfortable experience. That does mean that the main roads can be unpleasant: some have painted-on cycle lanes or intermittent shared-use paths, which provide a modicum of reassurance but are no substitute for proper cycleways.

The route from the city centre to the station is an example of this approach. Hills Road is traffic-filled and not too pleasant, especially at the Lensfield Road crossroads. The alternative route follows residential streets and is much more enjoyable, but also less direct and certainly slower.

Still, continued lobbying by the Cambridge Cycling Campaign has succeeded in getting the worst parts of the main roads sorted out. Most recently, an unusual arrangement of cycle lanes has made the Hills Road railway bridge less of a nightmare.

And is there safety in numbers? It may be a cop-out, but it’s undeniable that Cambridge motorists watch out for bikes in a way that you simply wouldn’t see in (say) a large industrial city. Every September, thousands of new students take to their bikes, wobbling their way across town for the first time since primary school. It’s a sight to behold and – mostly – comes off without incident.

The terrain deserves comment for one reason: it’s flat. Cambridge really only has one hill (Castle Hill), and it’s not exactly Alpe d’Huez.