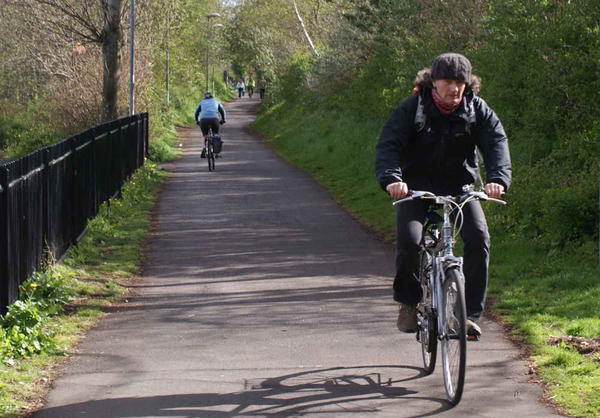 Here’s where it all began. The Bristol-Bath Railway Path was created by a volunteer campaign: the Cycle Bristol Action Group, aka Cyclebag. It was so well received that the volunteers formed themselves into a national organisation, renamed themselves Sustrans, and went on to build cycle paths all over Britain.

Thirty years on, and the path is more popular and useful than ever. Nothing has quite matched it since, but Bristol’s cycle network has nonetheless expanded, both with local routes and as a hub of Sustrans’ National Cycle Network.

The River Avon isn’t too much of an obstacle, with several bike-friendly bridges: Prince Street Bridge, in particular, is thronged with cyclists day and night. There are off-road riverside routes heading west to Pill, Shirehampton and Avonmouth. That on the north bank follows the busy Portway road and is best described as workaday; the south bank is bumpier but prettier. Bristol’s success in winning £7.8m of Government money means the routes will continue east of the city, as the ‘Bristol Promenade’ all the way to Keynsham.

Several largely off-road routes run to the south; one from Bedminster along Hartcliffe Way and into Hartcliffe, another from Brislington to Whitchurch. The new Festival Way connects the city to Long Ashton via the picturesque (if hilly) Ashton Court, and has rapidly become a popular commuting route.

In North Bristol, however, routes tend to be confined to particular areas. Mangotsfield and Emerson’s Green benefit from excellent connections to the Bristol-Bath path, but there’s precious little in Kingswood, for example.

Across the city centre, small cut-throughs do a good job of linking minor roads, cycleways and shared-use paths to make useful through routes for cyclists. Signage can often be sporadic, though: the ubiquitous fingerposts are definitely aimed at people on foot.