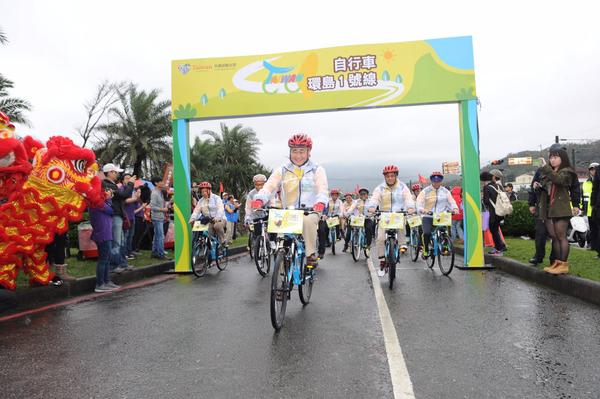 The ambition is that of no less than Prime Minister Mao Chi-kuo. Taiwan is already a leading country in bike manufacturing: now it wants to attract more touring cyclists to its shores.

Cycling Route No 1, as it’s called, is a signposted route running around the Far Eastern island. Part is on-road, but almost 400 miles on the east coast runs along scenic bike paths. Along the way, 122 rest stops provide cyclists with supplies and a place to take a breather – with some even set up in local police stations. The full route typically takes nine days to complete, but the Taiwan railways have set up ‘transit depots’ so cyclists can travel part of the route then conclude their journey by train.

As the name suggests, this is just the first in several routes planned for the island. According to Mao:

“We expect to flesh out Taiwan’s future cycling network construction by setting up the second and third round-island routes. With an extended drive continuing into 2018, we have every reason to believe that Taiwan will become an even friendlier environment for cyclists while spurring growth in the local bicycle and tourism sectors.”

Mao is far from the country’s only bike-friendly politician. The Mayor of Taipei, Dr Ko Wen-je, recently cycled 240 miles in under 21 hours, and is widely touted as a future President of the nation. The country hosts an annual Taiwan Cycling Festival, established in 2011.

Full details of the round-the-island route are available on the iTaiwanBike website. bicycletouringpro.com has a good guide to cycling in Taiwan.

Taiwan has about one motor scooter for every adult. 'nough said.

Taiwan is one of the best places to visit and it is just amazing and they have took a better step for betterment. In my custom box makers company we are also taking more precautions and ways to make our company better for custom makeup boxes

First of all, I would like to thank you for the great work you are doing. I have read your post thoroughly and the post is very much amazing. It provides very usefully knowledge and information. I really loved the idea. Keep sharing such type of information as it is very useful for me. I have also a website on we buy used valves

While reading this I realize that it is the best blog as compare to others. So keep posting this type of blog. doctor email lists

Wow, blogs are so wonderful, I also like these type of things and also interest these things. And want to say other people please visit my site and enjoy those blogs on which you are interested. Thanks.