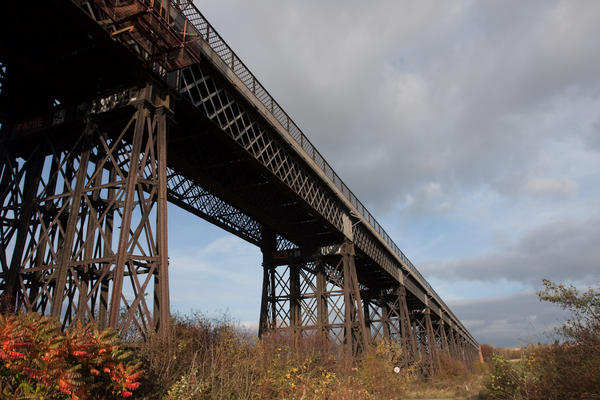 The 450-metre Bennerley Viaduct, one of the most impressive disused structures to survive from Britain’s railway age, could become a new cycleway if a Lottery bid succeeds.

Cycling charity Sustrans has been granted £40,000 to develop plans to restore the viaduct. If they find that a bike route is feasible, they’ll then ask the Heritage Lottery Fund for £2m to carry out the work.

“Part of the £40,000 funding will be used to develop a heritage walk around the viaduct, and to produce materials for local schools leading to an exhibition at Erewash Museum to get the local community interested.

“In the future, when we have really good solid evidence that there’s huge community support for this project, we will be putting a further application to the Heritage Lottery Fund to restore and reopen the viaduct.”

The viaduct was opened in 1877 to give the Great Northern Railway direct access to the coalfields of Nottinghamshire and Derbyshire. Crossing the Erewash Valley between Ilkeston and Awsworth, it was one of very few wrought iron viaducts to be constructed. The viaduct was closed to rail traffic in the 1960s and was in turn bequeathed to Sustrans’ sister charity, Railway Paths Ltd.

If reopened, the route would connect with the Erewash Canal towpath in the valley below, as well as a growing network of local routes between Nottingham and Derby.

Meanwhile, conservation and preservation work continues to be carried out on the viaduct by the Friends of the Bennerley Viaduct.

Previous story: Japan to get its own National Cycle Network
Next story: Taiwan aims to be “paradise” for bike tourists

Fantastic news and what huge chunk of British heritage!!

It has been reported and paraphrased by me that around two thirds of the targeted funds have been secured and planning applications are in place, with work hoped to begin by the end of summer 2019 and possibly completed by the end of 2020. Watch this space!!

The BBC report of 2nd Feb 2020 states that work is about to begin.