Get your kicks on Bike Route 66 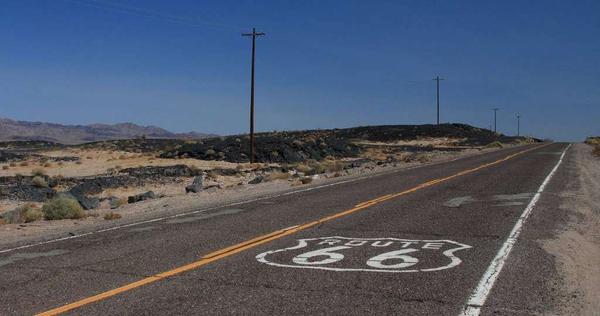 An ambitious plan to create a cycle route following the iconic US Route 66 is set to go ahead following crunch meetings with California transport officials.

The Adventure Cycling Association and the US Bicycle Route System – roughly speaking, America’s equivalents of the CTC and the National Cycle Network respectively – have together been planning a route from Chicago to Santa Monica, California, following the famous ‘Main Street of America’. The route would use the original Route 66 where possible, now a quieter road after Interstates (motorways) were created parallel to much of its length.

In eastern California, however, ACA concluded that the old route was too rough for enjoyable cycling. They quoted cyclists who have tried the route:

“[The surface] suddenly looked like it went through a war, with many huge cracks in the direction of travel that could swallow up my buddy John’s 38mm wide tires!”

“Route 66 quickly became the devil's highway, el camino del diablo, Route 666! We hit the worst [surface] of my life, about thirty or forty miles of it.”

“It gradually progresses from rough, to bad, to very bad, to ‘are you kidding me?!’. The hills are gentle, and the views are amazing… but I spent most of my attention dodging potholes, rocks and generally deteriorated roadway.”

Ironically, the best alternative identified is on the modern Interstate, where the hard shoulder provides for smooth and (largely) safe riding, if not quite so scenic. Bike riding is permitted on many Interstates in central and west coast America – but not on the crucial section of I-40 required to bypass the rutted parts of Route 66.

ACA and its supporters have been lobbying the California Department of Transportation to permit cycling along this section. Initially they refused, suggesting an alternative detour which involves a long hack across a desert then a stretch on another, busier Interstate. ACA felt this was not good enough – and with the deadline looming for the new Route 66 maps, time to find a solution was running out. Meanwhile, the local county government has no funds to repair the cracked surface of the old Route 66.

Now, after an emergency meeting on February 4, the Department of Transportation has conceded that the detour is not a real alternative, and in ACA’s words “has committed to working with us to find a solution”. It is hoped an outline solution can be identified this month in time for the maps to go to print.

Ginny Sullivan, special projects director for ACA, said the effort would be worthwhile.

“The vision for Bicycle Route 66 is the same as the original vision for Route 66, which was to connect the main streets of rural and urban communities. Bicycle Route 66 will be a perfect choice for traveling cyclists looking to explore the American heartland's natural beauty, history, and funky out-of-the-way places.”

The route itself will be around 2,500 miles long, bringing the Adventure Cycling Route Network to a total of 43,000 miles.

The UK has its own bike route 66 – an NCN route from Manchester to Leeds via the Rochdale Canal towpath, old railways and the Leeds & Liverpool Canal, plus a second section in rural East Yorkshire. It might not have the roadside diners and weatherworn gas stations of its more famous sibling, but you can get a mean organic lentil patty in Hebden Bridge.