Across Europe by bike - in just 37 days 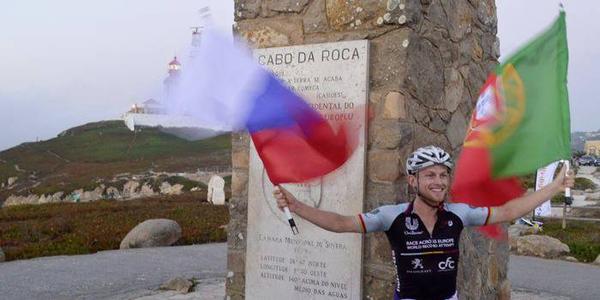 There’s a new world record in cycling – and we’re not talking about a measly 1km round a track, but the near-4,000 miles across Europe.

James Bowtell and his ‘Velo7’ team set out from Ufa, Russia, on 27th July, and arrived at Cabo da Roca in Portugal on 1st September – averaging 105 miles per day over 37 days. The two points are commonly considered the most easterly and westerly points in mainland Europe.

This is believed to be the first attempt at setting such a record, due to the logistical complexity of the challenge and the extensive mileage involved. Before departing from the UK, James was told by a representative of the Russian Cycle Touring Club that the event would not be possible. The route crossed seven European countries: Russia, Belarus, Poland, Germany, France, Spain and Portugal.

James was the only cyclist, he had built a strong support team consisting of fellow university undergraduates and graduates to assist in the pursuit of this unique world record. Commenting on the challenge, he said:

“It’s been exhilarating, exhausting yet one of the most rewarding experiences of my life. I can safely say it was worth the severe fatigue, my knee injuries and the hellish conditions to cross the finish line with my team, in the knowledge that we have set a world record and raised funds for our chosen charity Cyclists Fighting Cancer.”

During the challenge, the team had to overcome some testing obstacles in order to finish within the record time. In Russia, James developed patella tendinitis in his right knee, aggravated by the appalling condition of some of the roads. As a result of the total mileage and the inclines of the Pyrenees, James then suffered from ligament damage, an injury that could have brought the race to a halt and one that limited his ability to pedal with his left leg.

The team secured significant corporate support for the event, particularly from the main sponsors Halfords, Peugeot and Unilever. At the time of crossing the finish line the total amount raised was over £16,000.

You can find out more at velo7worldrecord.com.