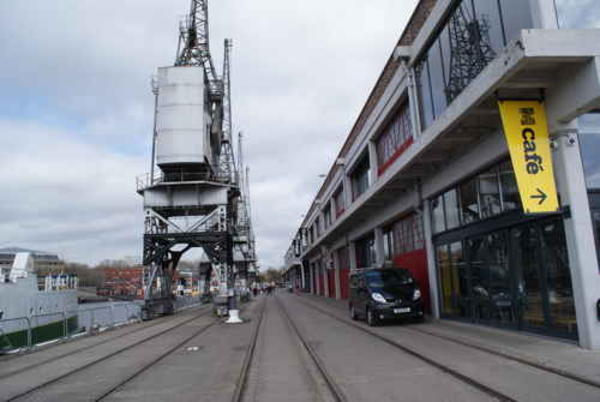 Bristol’s Inner Ring Road is its least appealing feature. By common consent, the St James Barton Roundabout is Bristol’s blackspot. Stokes Croft meets Broadmead here, making it an essential part of many cyclists’ commute. It’s also known as the ‘Bearpit’, and cycling round it does rather feel like a bear fight.

At some locations on the ring road, such as the Redcliffe Roundabout near Temple Meads station, cycle crossings provide an alternative to mixing with the traffic. Cycling is permitted on the pavement around Cabot Circus. Still, if possible, it’s better to find a route that avoids the ring road.

The harbourside in front of the M Shed museum might not seem like a danger spot. But there’s one very present danger here: the old Bristol Harbour Railway. It’s all too easy to get your wheel caught in the historic rail tracks. There’s a safer, if less attractive, alternative route behind the museum.

The stop-start traffic up the hill to Clifton, on College Green and Park Street, requires cyclists to stay alert. All the arterial main roads require care: the bus and cycle lanes have a tendency to disappear at junctions or narrow sections. Needless to say, these are all potential locations for conflict, especially where left-turning HGVs are involved.

Much of what’s colloquially called ‘Bristol’ is outside the formal city boundary. Though Bristol City Council has a reasonable reputation for listening to cyclists, the same isn’t necessarily true of (say) South Gloucestershire; provision is generally of a lower quality once you cross the border.