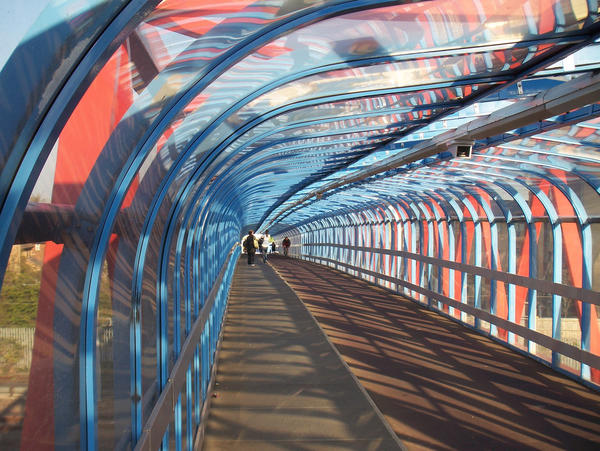 Bikes everywhere: that’s the defining feature of Cambridge. Other cities would (and do) forbid cycling across parks, through pedestrianised areas, and down alleyways. In Cambridge, by contrast, comparatively few places are off-limits. It’s expected that you won’t ride like a maniac, and in this city of everyday cycling, few people do.

Paths across parks like Midsummer Common, Parkers Piece and Coe Fen make it easy to get across town safely. Cut-throughs link cul-de-sac roads. In particular, the city has a nice line in cycle bridges over busy roads, the railway and the river, opening up possibilities for quiet through-routes that are closed to cars. There are eight car-free crossings of the Cam (discounting the private university bridges), and the cycle bridge near the railway station is, famously, heated!

There are a few longer routes. A riverside path runs from Jesus Green all the way to Waterbeach, though the surface peters out the further you go. Several of the main arterial roads have shared-use paths alongside, such as Madingley Road and Milton Road. The city has recently announced it plans to build Dutch-style segregated cycleways – notably along Huntingdon Road, which currently has little provision for cyclists.

Cambridge’s new guided busway was controversial at the time, but it’s gifted the city with a high-quality cycleway alongside. It heads west to Histon and St Ives, and south to Addenbrookes Hospital.