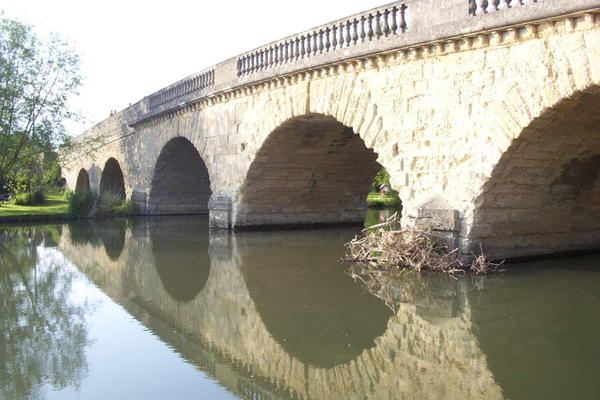 The grass-roots campaign for a cycle path from Oxford to Eynsham is a step closer to its aim, winning £29,000 of funding.

£25,000 will come from the Home and Communities Agency, and almost £4,000 from Vale of the White Horse District Council – whose district most of the path will be in. The route is intended as an alternative to the busy B4044 road from Botley to Eynsham, crossing the Thames at Swinford Toll Bridge (pictured).

“These awards are fantastic votes of confidence for the B4044 Community Path project from both the national and local level,” said Ian Leggett, chairman of the Bike Safe group. “Both organisations have had the vision to see what we are trying to achieve with the Community Path and that it isn’t simply a local project for the benefit of local people. The B4044 is a key commuter route into Oxford from West Oxfordshire, and the Community Path will benefit all vehicle users as well as cyclists and pedestrians.

“The Homes and Communities Agency and VOWH DC have made this connection where others fail to see the route’s strategic importance, and we commend them for it. ”

The congested, narrow road is currently an unappealing prospect for cycling. Bike Safe is seeking a shared-use path alongside it, and has already commissioned an engineering study from Sustrans which reported that the path was achievable. And as Ian Leggett explained, the urgency is pressing:

“The B4044 route will become even more important as the essential Northern Gateway project gets underway, heralding around five years of roadworks on the A40. Many more commuters will be turning to the B4044 as their daily route into Oxford from across West Oxfordshire and the Community Path will help to ease that congestion.”

Previous story: Three London boroughs to become “mini Hollands”
Next story: New Forest to get a network of Boris bikes