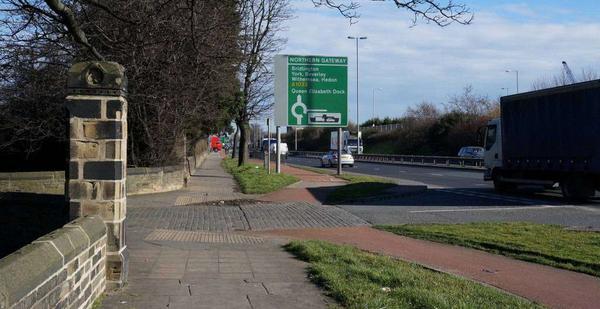 Almost £5m is to be spent on a dozen small schemes to make England’s trunk roads safer for cyclists. The first one, in Hull, will be unveiled today.

The Highways Agency is aiming to “cycle-proof” the roads it controls, which are generally the busiest and fastest in England. (Most roads are run by local councils, with the Highways Agency responsible for motorways and a small number of trunk A roads.)

The Hull scheme was completed last week. It comprises a shared-use path at Poolbank, “increasing safety by removing cyclists from the busy A63 carriageway”; new pedestrian railings and signs between Southcotes and Salt End roundabouts; and a new footway and cycle track at Marfleet Roundabout.

In the last five years, there had been two serious injuries and nine slight injuries to cyclists here. Two Times readers suggested the location when the newspaper invited nominations for cycling blackspots.

According to the Highways Agency’s director for cycling, Matt Sweeting:

“We have been working hard to cycle proof our road network and make even greater provision for cycling. These schemes aim to correct historic problems, retrofit the latest solutions and make sure that it is easy and safe for cyclists to use junctions. We are committed to improving cycling facilities on our road network.

“We hope this work will attract more cyclists to use the A63 corridor, and work is on-going to identify further opportunities to improve provision for cyclists across the country.”

“This new cycle scheme on the A63 is a big step for the Highways Agency and a sign that it takes cycling seriously. The organisation is showing real leadership by appointing a senior figure to push through change and by committing significant funds to build more bike lanes and safer junctions. The Highways Agency needs to provide the gold standard in provision for cycling and we hope this is the first sign that it will get there.”

cycle.travel has obtained more information about the other schemes that the Highways Agency is currently working on. They are mostly clustered in the Midlands and North-West, with several around Manchester, Nottingham and Derby. They are:

The total spend comes to £4.8m, with a further £15m to be spent on an “ongoing rolling programme of cycling improvements” in 2015-16. On the same day, the Highways Agency has begun consulting on a £1.5bn scheme to widen the A14 between Cambridge and Huntingdon.

The Agency says that it is adopting a new approach where “cycling improvements are assessed separately from schemes for motorised vehicles… separating out the cycling schemes guarantees that the highest priority locations will be considered for the construction of schemes to improve provision for cyclists”.

Certainly the improvements at motorway junctions will be welcomed by those who have tried to cycle across them. However, in Hull, the improvements could be viewed as a curious priority given that a traffic-free cycleway runs parallel, just 500m to the north; similarly, the Alcester scheme appears to cater for a small number of racing cyclists who want to train on a dual carriageway, rather than the majority who would rather cycle elsewhere. The Highways Agency has previously demonstrated that it is able to fund improvements to paths away from its roads, rather than on a busy trunk road where comparatively few people wish to cycle.