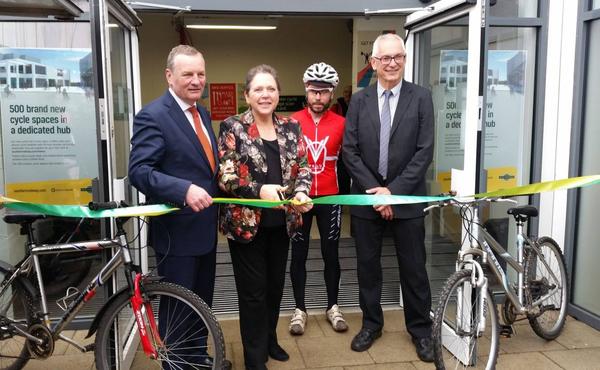 Brighton railway station now has one of Britain’s biggest bike parks after the opening of a £1.5m cycle hub.

500 secure cycle parking spaces have been provided at the rear of the station, open to rail and non-rail users alike, and bringing the total to 800.

The centre also offers a bike repair and maintenance workshop, and a coffee shop for visitors. New keep fit facilities, offering classes such as yoga and bike spinning, showers, changing rooms and accessible toilets are due to open shortly.

“Our ambition is to encourage people to cycle more often. This government has announced £15 million of funding to improve cycling facilities at rail stations and hubs like this one in Brighton will help make that vision a reality. We are serious about getting people on their bike and this fantastic facility will make it easier and more convenient for people to cycle to and from their station.”

The Department for Transport provided £650,000 funding for the hub, with additional contributions from Brighton and Hove City Council, Southern Railway and Network Rail.

The plan will be dwarfed by Cambridge’s new station bike park, however, where a staggering 3,000 spaces will be provided.

Nice. Could they also stop being dicks about people wanting to travel home with bikes after the London-to-Brighton rides, please?