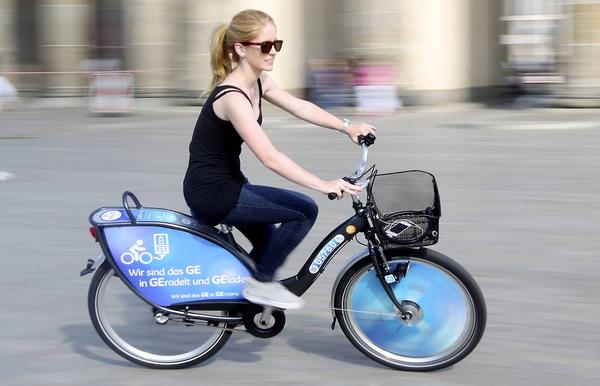 Unlike most such hire schemes, Bath’s system is designed expressly so that leisure cyclists can take bikes out for a longer ride, as well as benefiting commuters.

The new scheme is run by German company Nextbike, which administers an increasing number of hire schemes around Britain as well as many on the Continent (pictured). Bath’s previous scheme, a small-scale affair with just four docking stations, foundered partly because the bikes proved unreliable and the hire system was unclear. Nextbike believes it can put this right.

100 bikes will be docked across 9 rental locations including Bath Spa railway station, various city centre locations, Bath Spa University and the Royal United Hospital. The bikes are available 24 hours a day. The scheme is designed with visitors and students in mind, but local businesses and organisations are also being encouraged to use the bikes.

Bikes can be booked by phone, using a smartphone app, or at the Bath Visitor Information Centre. Registration is free and each rental will cost £1 per half hour: for full subscribers, rentals are free for the first half an hour of every rental. There is a maximum charge of £10 per day to allow riders to explore the city for longer, including nearby leisure routes such as the Two Tunnels and Kennet & Avon Canal. In another contrast to schemes such as London’s, a lock will be provided.

“It’s been a pleasure preparing for the launch of our Bath scheme and great to be working with so many local organisations, all eager to make the most of their new service. I can’t wait to be back later this summer to see lots more people exploring and getting around Bath on two wheels.”

Maintenance of the hire bikes will be managed by local bike shop, Take Charge Bikes. A launch parade is taking place to mark the start of the new scheme.